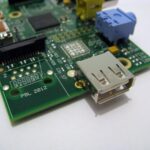 From the very beginning the Raspberry Pi Foundation aimed to create a device that would encourage young people to experiment with computers, programming and real-world hardware.

Just as George Lucas decided to make Star Wars Episode 4 first, the Foundation released the Model B as it had the best chance of catching people’s imagination. It succeeded.

Now it is time for the Model A to make an appearance on the Raspberry Pi stage. The Model A is almost identical in both specification and appearance to the Model B but with the following main differences : 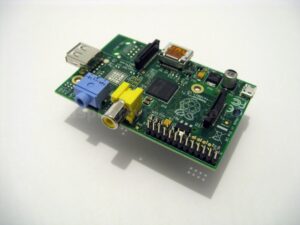 As a result of these differences it :

In keeping with the Model B (Rev 2) device it has mounting holes and the P5 and P6 headers. The usual composite video, 3.5mm audio, HDMI, microUSB and GPIO connectors are also present.

So why bother with the Model A when the Model B has a higher specification? Well the drop in price makes it even easier to get into the hands of children and the reduced power consumption increases the range of projects it can spawn. Especially those involving batteries and solar panels.

The Model A is made exclusively in the Sony factory in South Wales so proudly carries the “Made in the UK” text.

Here are a set of photos of my Raspberry Pi Model A which I ordered from CPC (Farnell).