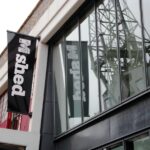 The Bristol Mini Maker Faire was held on 23rd March 2013 at the M Shed on the waterfront.

It was my first maker faire and my main objective was to hear Eben Upton from the Raspberry Pi Foundation speak. The traffic conditions resulted in his talk being delayed by one hour which gave me, my wife and my son a bit more time to look around.

I wasn’t quite sure how child friendly the event would be but my son loved it. He particularly enjoyed the weaving, spinning, sit on hovercraft and robots.

Meanwhile I wandered over to the Pibow stand and was pleasantly surprised to see Liz Upton. I’m not sure if she noticed the star-struck look on my face as I introduced myself but it was one of many highlights to my day. 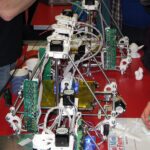 It was great to finally see some 3D printers in action. Reprappro.com had three models on display and were busily printing their own spare parts. My son would have happily bought one (with my money) to print an endless supply of Yoda heads.

Once you’ve got one printer you can print some of the parts for the next one!

Some of the other highlights of the event included :

There were lots of other bits and pieces and I can’t list them all here. I’m sure they will feature in the various photos appearing on other websites, blogs and social media streams.

At 3pm I joined the queue for Eben’s talk. There were two queues. One for the 50 people with tickets and another for everyone else that turned up anyway. Luckily for them there was some standing room! It was interesting hearing about the development of the Raspberry Pi from one of its creators. A show of hands revealed that most of the audience already owned a Raspberry Pi which was perhaps no surprise. I got a chance to speak to Eben afterwards and now have a pair of signed Pibow cases for my collection. The session was recorded so keep an eye out for the video when it is released.

Here are some random photos I took. There were so many people wandering around it was quite difficult to find the space to take a photo!

If there was something I didn’t take a photo of it is likely it was surrounded by enthusiastic children or my son was dragging me to the next table.

The event was clearly a fantastic success for Bristol and the growing maker community. The organisers, exhibitors and sponsors can be extremely proud of themselves. There are more details on the official Bristol Maker Faire website.