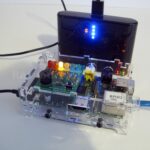 In my previous battery tests I’ve stuck to AA batteries. Mainly because I’ve got lots of them and I like their versatility. Recently I decided to buy a portable Li-on battery pack designed for recharging mobile phones and tablets while on the move. Given I could use it for portable Raspberry Pi projects and charging mobile devices it seemed like a good thing to buy.

So I picked one from eBay. If you are going to have one you might as well have a big one so I opted for a device with a stated capacity of 12000mAh. It has two USB ports which support charging currents of 1A and 2A although the total current from both ports can not exceed 2A. 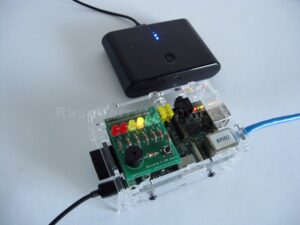 So I setup a Pi using the same setup as I used before.

The stated battery capacity of many Power Banks is a bit confusing. They rarely confirm at what voltage the capacity relates to. Is it the 5V output or the internal 3.7V of the Li-on battery cells? Thanks to a comment by Ben Friesen (see below) I have revised this article to assume the stated capacity is measured at 3.7V. The energy in the battery pack can then be calculated using :

This compares to a typical 6 AA battery pack :

After revising my estimate using 3.7V as the internal battery voltage this is exactly as expected.

Overall I am pleased with the results and this has to be the easiest way to power a Pi when you can’t plug it into the mains. I’m a fan of AA batteries but if you need 10+ hours out of your Pi then you can’t beat the density of a Li-on battery pack.

Here are some photos I took during the test showing the size of the Power Bank compared to the Pi :

I’ve included a photo of the packaging in the collection of photos as it contains some entertaining statements such as “Get rid of kids”.

Note : The eBay description stated the battery could be charged via MicroUSB but the device is actually fitted with a MiniUSB port. This is a huge difference and something I pointed out to the seller. I didn’t mind as I have Mini and Micro USB chargers but I did expect the description to be updated for the sake of other buyers. The seller hasn’t bothered to change the description which is why I’m not going to bother giving him a free advert here. Before assuming you can charge the battery pack with MicroUSB get the seller to confirm it via an eBay message.