It was a lovely summer’s day in Bristol and something slightly unusual was going on in town.

80 Gromit statues were being deployed as part of the “Gromit Unleashed” public art exhibition. This is a charity event led by Aardman Animations to raise money for Bristol Childrens’ Hospital.

So it seemed like the perfect chance to try out my Raspberry Pi camera unit as there would be plenty of things to take photos of.

My equipment consisted of :

Here is a photo of my Raspberry Pi camera contraption guarded by my faithful cat Morpheus (unlike me he is not a great Gromit fan) : 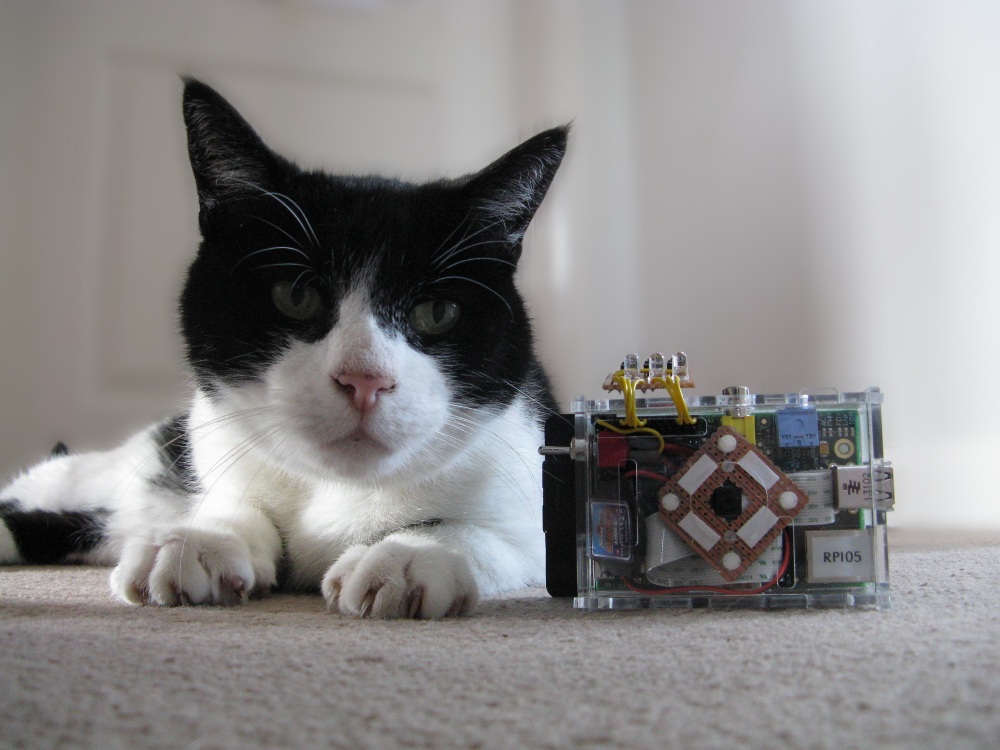 It consists of a 6 cell AA battery box attached to a clear perspex Pi case. The camera module is attached to some stripboard which is sticky padded to the case. A metal 8mm washer allows for the attachment of lenses. A toggle switch on the left connects the battery power to the Hobbyking UBEC which in turn provides 5V power to the Pi. A small piece of stripboard connects to the GPIO header and provides 3 microswitches and 3 coloured LEDs.

I wrote a Python script which ran on boot. To take a photo I flicked the power switch and waited for my Python script to flash the LEDs. Pressing one of micro-switches then took a photo. The middle switch toggled the “-rot 90” command line option and the other switch told the Pi to shutdown.

I’ve never used a camera with removable lenses so I just had fun and tried a few different combinations. There is no viewfinder or screen so there was a large amount of luck involved in lining up shots … but that proved to be quite good fun.

Overall I was pleased with the results. It was exciting to actually take a load of photos and have no idea how they were going to look until I got home. It was just like being back in the 1990’s when I took photos on 35mm. You would take a whole roll of photos and have to wait two weeks to get them developed. These days digital photography has largely erased that aspect of photography for most people.

There are two improvements I am going to make to the camera before using it again :

Detection Area Masking in motionEyeOS on the Raspberry Pi