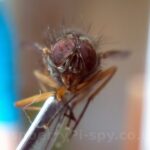 In a recent article I mentioned how you can add cheap interchangeable lenses to your Raspberry Pi camera to make it more versatile. I’ve now played around with the macro lens and thought I’d show you a set of photos I took.

My son is really interested in insects so I decided to take some macro photos of whatever I could find behind the sofa. The lucky subjects were a moth and some sort of fly which we found in the conservatory (someone had vacuumed under the sofa!).

The fly was my first attempt. The focal point is about an inch in front of the lens and I held the fly with tweezers as I moved it in and out of focus. I used the “raspistill” command with the “t” parameter set to 10000. This gave me 10 seconds to position the fly before the Pi took the photo. I repeated this about 50 times (with different file names!). The photos below are four of the better images. 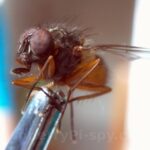 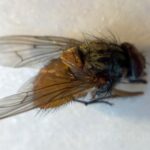 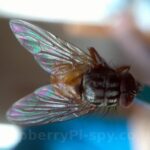 Holding the tweezers still wasn’t easy. The slightest movement can result in a blurred photo and framing the shot takes a bit of practice. The photos above are cropped as you always get too much background and I wanted to concentrate on the interesting bit in the middle. You can clearly see the compound eyes and individual hairs on its body.

My second attempt was a moth. This time I decided to mount the moth on something solid so once positioned I could take the photo without anything moving. I used a needle and some sections of polystyrene pizza packaging to mount the moth on a little stand. This could then be slid in front of the camera until the preview was in focus. As with the fly photos I took lots and selected the good ones. These were then cropped and had the white balance adjusted in Gimp. 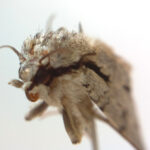 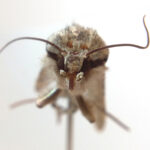 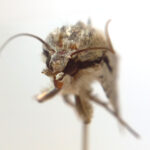 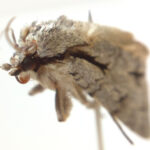 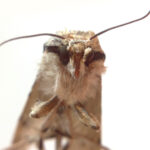 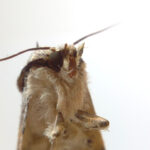 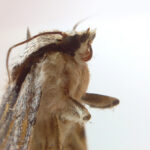 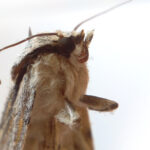 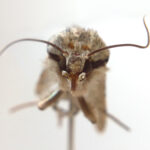 You can see its furry body and coiled proboscis.

The results are quite cool and demonstrate just what you can achieve with a bit of experimentation.

For children this is an amazing opportunity to learn. Once you’ve got a Pi, camera and lens you can explore the world in a new level of detail. Why bother reading about a fly’s head in a book when you can find a fly and examine it yourself?