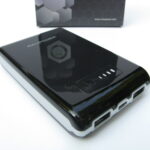 One of the great things about the Raspberry Pi is that it is easy to go portable. What is even better is that because the Pi can accept 5V it will work with lots of power accessories designed for mobile phones and tablets.

In previous posts I have run a few of my Raspberry Pis from standard AA batteries and a generic Li-on Power Pack. This week I tested a RAVPower 10400mAh Power Bank to see how long it could power a Pi running my standard battery test. 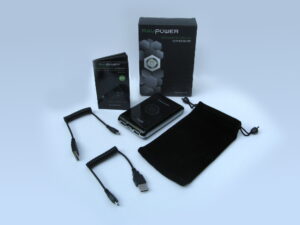 and has the following features

As with most Power Banks its comes half charged. This might seem strange but Li-on battery performance is maximised if they are stored at 40-50% capacity. I plugged it into an Asus Nexus 7 2A MicroUSB charger and let it charge to 100%. Due to their huge capacity these sort of batteries take a while to charge. The blue status LEDs let me know when it was ready.

Once fully charged I was ready to start the test. The Pi was setup with the following equipment : 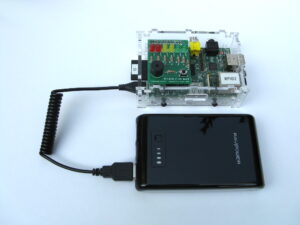 The Pi was networked and I used Putty to connect to it from PC. This was used to set off the Python script. The current uptime was updated in the Putty window and I just had to wait until it stopped working.

Comparing to my AA data the predicted time would be between 14 hours 50 minutes and 16 hours 40 minutes.

The RAVPower pack lasted 17 hours 55 minutes (1075 minutes). This was almost an hour longer than I predicted based on past experience. The Pi isn’t doing much in this test but it showed the RAVPower was better per mAh than the larger generic power pack I bought from eBay.

It’s a great addition to my battery collection and when it’s not powering a Pi I can use it to charge a phone or tablet.

Here is a set of additional photos I took of the battery pack, its accessories and my Pi setup: