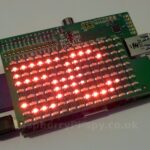 Back in 2013 I purchased a Pi-Lite at the Cambridge Raspberry Pi Jam.This is a 14×9 matrix of red LEDs mounted on a PCB that can be attached to the Pi and controlled via the GPIO header. The 126 LEDs can be turned on individually or used to display scrolling text.

Although there was plenty of help material available from the Openmicros.org site (no longer available) I found it a little bit confusing. Information was spread over a mixture of pages and it was easy to get lost in the more advanced detail while looking for a gentle introduction.

So here is my simplified version. My objective was to configure the SD card, connect my Pi-Lite and get some of the example Python scripts working. Nothing fancy just a quick setup before deciding how to move onto something more complicated.

UPDATE : This article was updated to work with the latest Raspbian release. The Openmicros.org site no longer exists but I still got my device to work and the Github libraries are still available. 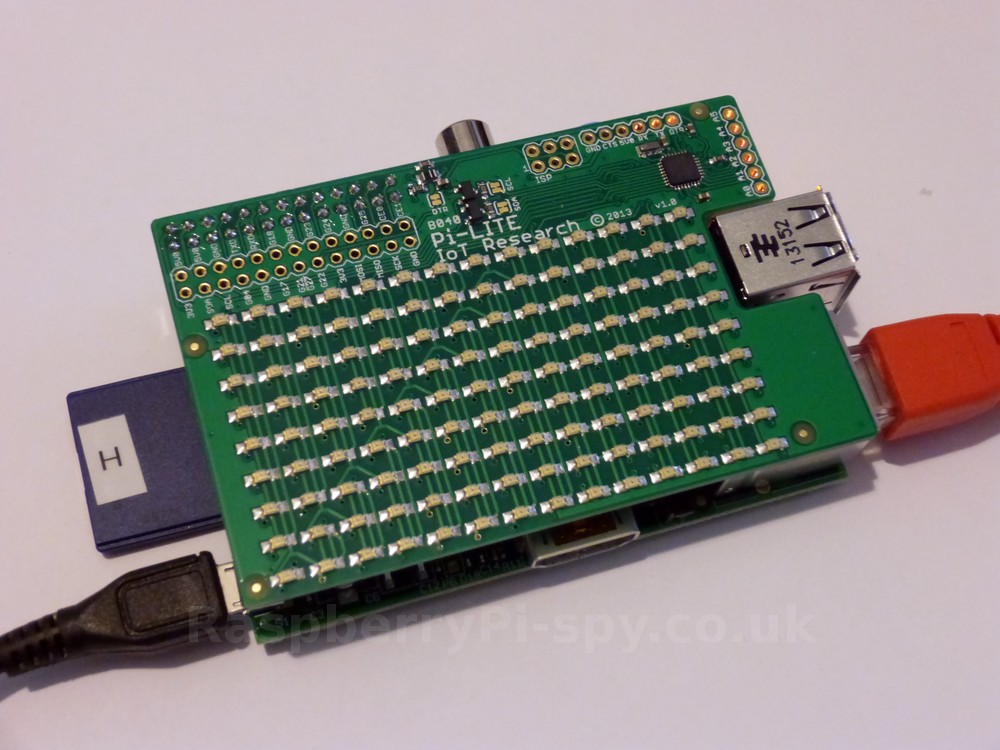 To start the setup I always use the latest version of the Raspbian SD card image which is available from the RaspberryPi.org download page.

By default the Raspbian operating system allows input and output on the serial port (header pins 8 & 10). This would interfere with the Pi-Lite which uses the serial port to receive its data so we need to disable this functionality.

This can be done using the “raspi-config” utility either from the Pixel desktop or the command line.

When you exit raspi-config decline the offer to reboot.

Then press “CTRL-X”, then “Y” and finally “Enter” or “Return” to save. You should be returned to the command line. Now we’ve made the configuration changes it’s time to shut-down..

Wait for the Pi to shut-down completely. Disconnect the power and attach the Pi-Lite to the GPIO header making sure the connector is correctly aligned.

Connect the power and allow the Pi to boot.

To test the Pi-Lite we can install a small utility called Minicom which will allow us to send data across the serial port to the Pi-Lite. This data should be displayed on the Pi-Lite.

To install Minicom use the following command :

Press “Y” when asked if you want to continue.

Once installed you can use Minicom to send data to the Pi-Lite using the following command :

Pressing keys on your keyboard should result in them appearing on the Pi-Lite!

To exit Minicom press “CTRL-A”, then “X” and finally press “Return” to select “Yes” from the prompt.

Since Ciseco are no longer in business I added the original Python example scripts to my BitBucket repository. This was so I could update the serial port reference to “/dev/serial0”. This enables them to work with all Raspberry Pi devices including the Pi 3.

First we need to install the Python serial package :

This will download the files into a folder called “rpispy-pi-lite”.

The original official files are held in a Git repository on Github.com. I’ve left this section here in case you want to look at them but you don’t need them.

Now create a directory which Git can use to store data we pull from Github.com :

Now we can pull the examples from Github into our new directory :

Next we need to install the Python serial package :

Typing the following command will browse to the Python examples folder :

Typing “ls” will list the available files in this directory.

The following Python examples should now run without any other additional installations or tweaks : 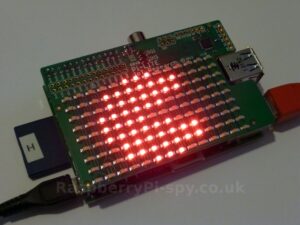 Run them using the following command as an example :

Some scripts will end after a few seconds but you may need to use “CTRL-C” to exit the examples that run in a continuous loop.

Some of the other scripts require a few more Python libraries to be installed.

When that has finished installing you should be able to run the “PiLiteWorldTime.py” example. This should give you the time in various capital cities including London, Cairo and Paris.

For some reason I was getting an “Error:’dict’ object is not callable” error when trying to run “PiLiteWeather.py” and “PiLiteStock.py”. To solve this I ran :

which seemed to solve the problem by re-installing the requests package.

Here are some photos.

The official website no longer exists but here is the last available user guide :