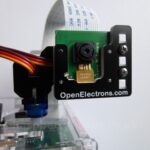 The OpenElectrons “PiPan” is a pan and tilt mechanism for the Raspberry Pi Camera Module. I’ve used the Pi camera in a few projects but this is the first bit of commercial Pi camera hardware I’ve had the chance to play with.

The project was successfully funded on Kickstarter on 11th September 2013.

It consists of a kit which when assembled allows you to move your camera in both horizontal and vertical directions. To achieve this is uses two small servos and a control board which can be controlled using Python. It can pan 180 degrees (from left to right) and tilt 110 degrees (top to bottom) although I haven’t been able to test this yet. 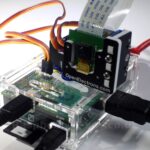 I mounted my PiPan on a standard perspex Pi case with the screws supplied with the servos. The control board plugs directly on the Pi’s GPIO header and can be seen inside the case.

The biggest challenge is mounting the unit on a stable platform while ensuring the range of movement isn’t restricted by the camera’s ribbon cable.

The Python interface is fairly easy to get started with and it only takes a few lines to initialise the servos and send them to a specified position. Using a modified version of one of the supplied example Python scripts I ran the PiPan through a short sequence of moves which you can see in the following video :

The kit is a beta design and there are a few tweaks expected for the retail version. This will include improvements in both the supplied hardware and software.

Here are some additional photos of my PiPan :