As soon as I ordered some Pi NoIR camera modules I also ordered some bits and pieces for testing. This included some standard IR LEDs and a couple of cheap IR CCTV illuminators.

These would allow me to test with the camera module and work out what sort of IR lighting I needed for different applications. Ideally I was looking for suitable lighting for an outdoor security camera and I wanted to workout if it would be easier to use ready made lights or make my own.

In the example shots below I used raspistill with default settings. i.e. 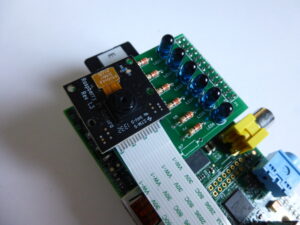 To start with I decided to try some standard IR LEDs and to simplify the wiring I used a BerryClip PCB to mount six of them.

The LEDs were 5mm Kingbright LEDs with an emitted wavelength of 940nM.

The BerryClip board (~£6) connects the LEDs (~£2.50) to GPIO pins via 330ohm resistors. This limited the current to each LED to approximately 5mA, way below their 50mA rating. I turned them all on using a simple Python script based on one of the standard BerryClip examples.

The intensity and range were quite limited and objects more than 1 metre from the camera disappeared into the darkness. I suspect this was due to not driving them with enough current and I would expect better results if I made a custom board where I didn’t need to drive the LEDs from the GPIO pins. Although these shots have a certain style to them and this may be exactly what you are after! 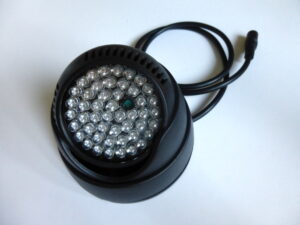 Next up was the 48 LED CCTV illuminator I ordered on eBay (~£6). It needed 12V but produced much more light. It easily illuminated my office and if pointed directly at the Pi NoIR resulted in a completely white photo! I could position it almost anywhere in the room and the reflected light still gave good images.

The LEDs have a very faint red glow to them when on.

Here are a few test shots :

I really like the black eyes I appear to have. Very Blair Witch. 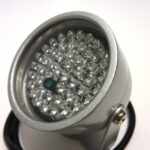 I also bought a few metal cased illuminators. These are very similar to the black plastic one above but are weatherproof. The light output was very similar and it produced similar test photos.

So for my purposes I think the CCTV illuminators will suit me better. The ones I ordered aren’t really suitable for outdoor use but I will give them a bit of shelter while I do some testing. If that goes OK I can replace with slightly more robust versions.

As you can see from the test shots the lighting you may need for your project will depend on the results you are after. If you are looking to light up a bird box then you almost certainly want to consider using a handful of IR LEDs.

Given you can’t see Infrared I did a quick Google to see if these sort of lamps have any health dangers. There don’t seem to be any major concerns but I would use a bit of cautious common sense and avoid staring directly at IR sources. Your eyes can’t see the IR so your pupils won’t react to intense levels as they would do for visible light. They seem to be considered safe but a bit of over-cautious paranoia where your eyes are concerned is no bad thing.

The Pi NoIR camera module is now available from all the usual online Pi accessory shops.

Detection Area Masking in motionEyeOS on the Raspberry Pi