Back in the old days I had an Acer N50 Premium PDA. For the youngsters out there it was like a Smart Phone but without the phone bit, the capacitive touch-screen, memory, apps, GPS or battery life. I mainly used it as a TomTom based sat-nav device connected to a Holux GPSlim236 Bluetooth module.

The module had been sat in a drawer for at least five years and I decided to see if I could get it working with the Raspberry Pi. Surprisingly I didn’t need to charge it as five years later it still powered up fine. It uses what at the time was a standard Nokia phone battery.

This is the hardware I used :

This was one of those experiments where Google gave me all the answers once I had pieced together fragments from many different blogs and forums.

Although I’m using a specific GPS device I don’t see why it wouldn’t work with any Bluetooth GPS module given they will all be sending serial data in standard NMEA format. Let me know if it works for other units.

Start with a fresh Raspbian image on your SD card and plug it into the Pi along with the Bluetooth dongle. Power up the Pi with it connected to a network as we will need access to the internet.

As this is a fresh SD card start by running :

and expand the SD card partition to fill the spare card space. Then run :

to ensure everything was up to date. This will take a while (5-10 minutes) so it is a good opportunity to grab a coffee. In order to form the link between the Pi and the device we will need to install a few extra packages :

Answer “Y” when prompted. “bluez-utils” provides some Bluetooth tools and “gpsd-clients” is a collection of tools for processing and displaying data.

As we’ve installed so many new files it is a good idea to reboot :

With the Pi powered up switch on the Holux module and give it 60 seconds to look for satellites. We need to know the MAC address of the module so run :

After a few seconds you should get a response :

Step 4 – Connect To The GPS Module

Next we need to run the following command to connect the Pi to the remote Bluetooth device :

The & at the end tells the command to run in the background and return to the command prompt. Remeber to use your MAC address! When it runs it echoes a process ID to the screen. A few seconds later it will display some text :

You may need to press the Enter key to return to the command prompt. Do not press “CTRL-C”!

To test the connection we can run :

If the connection is working you should see some GPS data (NMEA format) being streamed from the GPS module. Press CTRL-C to return to the command prompt.

Next is the “gpsd” daemon. This is a process that runs in the background and translates the NMEA messages for use by the clients.

The b switch tells it to only read messages and not attempt to send anything back to the GPS receiver.

At this stage your GPS module should be streaming data to the Pi over Bluetooth. To present this data in a more readable way we can use one of the clients that comes with the gpsd package. Try :

If everything has gone to plan you should see something a bit think this :

To return to the command prompt you can press CTRL-C.

Once you’ve got cgps working you can try the GUI client xgps. Fire up the GUI by typing :

Open a LXTerminal window by clicking the desktop icon. Then run the client by using : 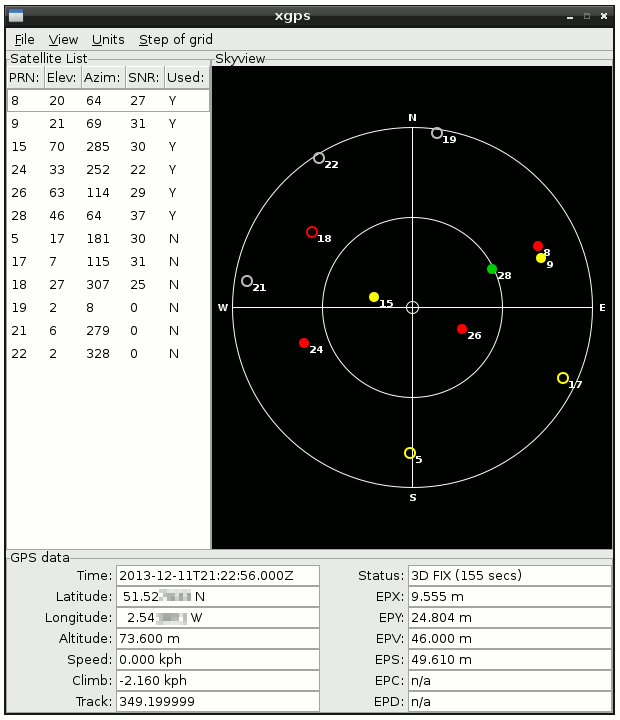 If it’s all working and you are still reading this then congratulations!

When you reboot you will lose the Bluetooth link and will have to repeat the process from Step 4. That’s boring. By editing a system file we can get the Pi to reconnect on start-up.

Remove the # characters in front of the rfcomm0 {} block and edit the settings so you end up with something like this :

Remember to set bind to “yes” and replace “YOUR_DEVICE_MAC_ADDRESS” with the MAC address of your device.

Use CTRL-X, Y and then enter to save and exit from the nano text editor. On reboot you will now be able to start at Step 5 (running gpsd).

To take it a step further you can get gpsd to run at boot automatically. To do that run :

This will bring up a wizard which configures gpsd to start automatically. You will need to enter a few details such as the serial port location (/dev/rfcomm0) and the command line switches (-b). I wasn’t interested in USB devices so I told it to ignore those.

When you restart your Pi it should connect to the GPS device and allow you to launch the clients straight away.

Once you’ve got the basics working you can start exploring all the other applications that are happy to read data from the gpsd process. One application worth trying is FoxtrotGPS. It can be installed using :

and then run using :

It loads maps from OpenStreetMap and will show your current position as well as speed and altitude.

There are plenty of other GPS clients that will probably run on the Pi. What you do with them is just down to your imagination. 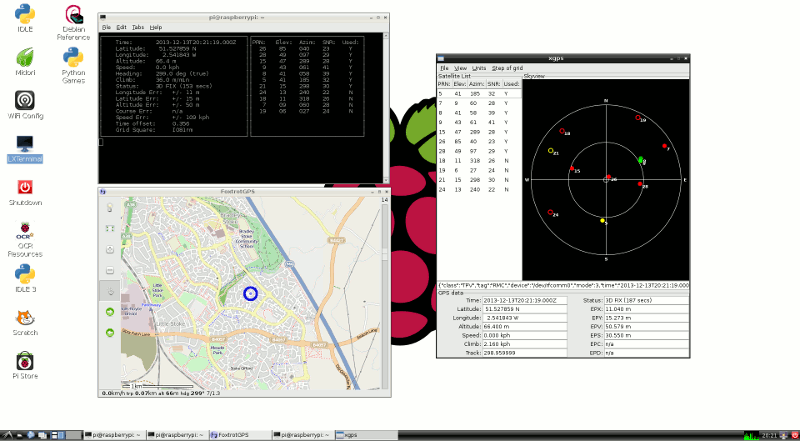 I have seen messages that the following devices work using this tutorial :

If you’ve tried it and it works for your device let me know and I will update this list.