Despite the threats of floods and road closures we headed into Bristol today to take a look round the DigiMakers event at At-Bristol. The last one we attended was great fun and my son enjoyed the Scratch workshop with robots.

This event was themed around computer games which gave the technology on display a different feel to the robot themed event in November. 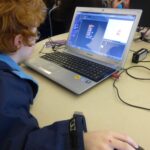 I didn’t manage to get tickets for the beginners Scratch workshop but luckily there was space for us to setup a laptop and follow the worksheets. My son had fun and completed a basic game where a dog chases a cat. Being a cat fan he insisted on adding some giant meat-eating insects to swing the outcome in the cat’s favour. Poor dog! 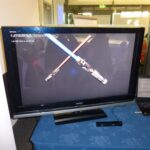 We didn’t get more than a few metres through the main door before my son decided to stop at the SN Systems table. They had interactive light sabres making use of those wireless controllers with glowing balls on the top (sorry my Playstation knowledge is a bit lacking these days!). With a bit of code the light sabres became swords. Or fish!

Further along their table they had an augmented reality demo running where you could “flick” little droids onto the screen and then kick them. Or hoover them up into the controller. I admit to kicking a few droids. 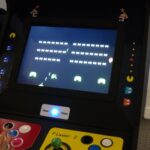 Cotham School brought along their hand-built arcade cabinet. It could play a variety of games including Space Invaders and Gauntlet. These had been programed by the pupils using the development system from Yoyo Games. I spent many an hour/day playing Gauntlet on my Atari STE back in the day. I’ve still got “Red Valkyrie has shot the food!” permanently burnt into my memory (alongside various Dungeon Master sound effects). 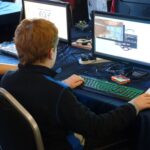 There were various other workshops and sessions in the main arena. Lots of monitors, laptops, LEGO Mindstorm robots and of course a good collection of Raspberry Pis. At this event there seemed to be more young people doing things themselves which was good to see. I noticed a few Minecrafters (is that the right phrase?) amongst them.

Colin from The MagPi manned a table and seemed to be permanently surrounded by both adults and children. I think the robot arm and pile of sweets may have had something to do with it! 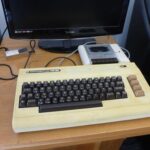 As you’ll see in the photos below someone also setup a Commodore VIC-20 but due to problems with the monitor it wasn’t running when I saw it. The owner explained to some kids what computers were like when he was younger. They asked him when he was born as if he clearly must be at least 100 years old.

As it turned out he wasn’t much older than me but to an 8 year old that is as good as 100!