We attended another excellent Digi Makers event held at the @Bristol centre. It’s always nice to wander around and look at the various activities but I also signed up my son for a couple of the workshops. They suggested using SD cards loaded with NOOBs but being a rebel desperate to fight the system I went for raw Raspbian images.

My son and his friend were booked on the “Sonic Pi” and “Cartoons With Scratch” workshops. At five and six years old they were at the lower end of the age range but I figured with suitable adult supervision we could keep them on track. Keeping my son’s attention for one hour is a near impossible task so I took some sweets to use as bribes just in case.

What could possibly go wrong? 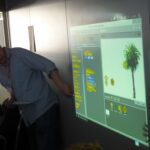 Most kids like cartoons so its a good theme to couple with Scratch given it’s graphical interface.

Ben from Linux Voice magazine ran the session and we managed to create a basic animation. In this animation a monkey throws a ball to knock some bananas out of a palm tree. 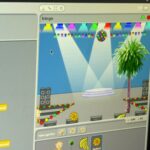 Once we had that working we modified it to use a disco background and gave the monkey a set of sun glasses. The hour went quite quickly and the kids had fun. It’s amazing how quickly they work out how to add new sprites and browse through the various assets available.

While I had my back turned my son modified the monkey dialogue with some additional phrases from various unsuitable pop-songs. 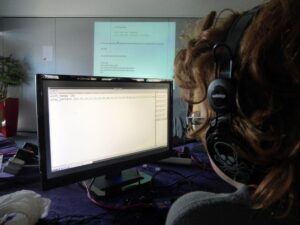 Although reading about it previously this is the first time I had used Sonic Pi. We had some trouble getting the sound to work and I suspect the monitor speakers weren’t working. We were using the same Pi as the Scratch workshop and the sound had worked OK then.

Using the following command in LXTerminal we diverted the sound to the headphone socket :

This worked OK and we started making “music”. We strayed from the worksheet and with a bit of help from Google we created a basic “Twinkle Twinkle Little Star” script. For younger kids it would be useful to have a set of predefined tunes that they could type in as they seemed to prefer this to the more advanced features. 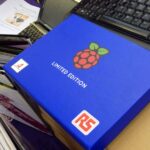 The MagPi magazine had a stall manned by Colin with various books on display. They also had a Limited Edition Blue Pi made by RS Components which was being offered as a prize by the Digi Maker organisers.

A number of the robot activities were based on LEGO NXT creations but there were also some Arduino based devices in action.

Overall it was another great event and it’s amazing it is run for free. Thanks to everyone involved in the hosting, organisation and workshop running.

Here are some more photos I took :