Alex Eames from RasPi.tv very kindly gave me a beta version of the HDMIPi screen for the Raspberry Pi along with some stickers*. This was a project funded via a successful Kickstarter campaign which aimed to raise £55,000. In the end it raised £261,250. Which was nice!

Small HDMI screens are expensive. Native HD ones are astronomical. We want to drive the price down “Raspberry Pi” style.

I backed the project when it started as I wanted a portable screen and I knew I could trust Alex and the Cyntech team to deliver. It was a very nice surprise to get my hands on the screen so I could start to have a play. 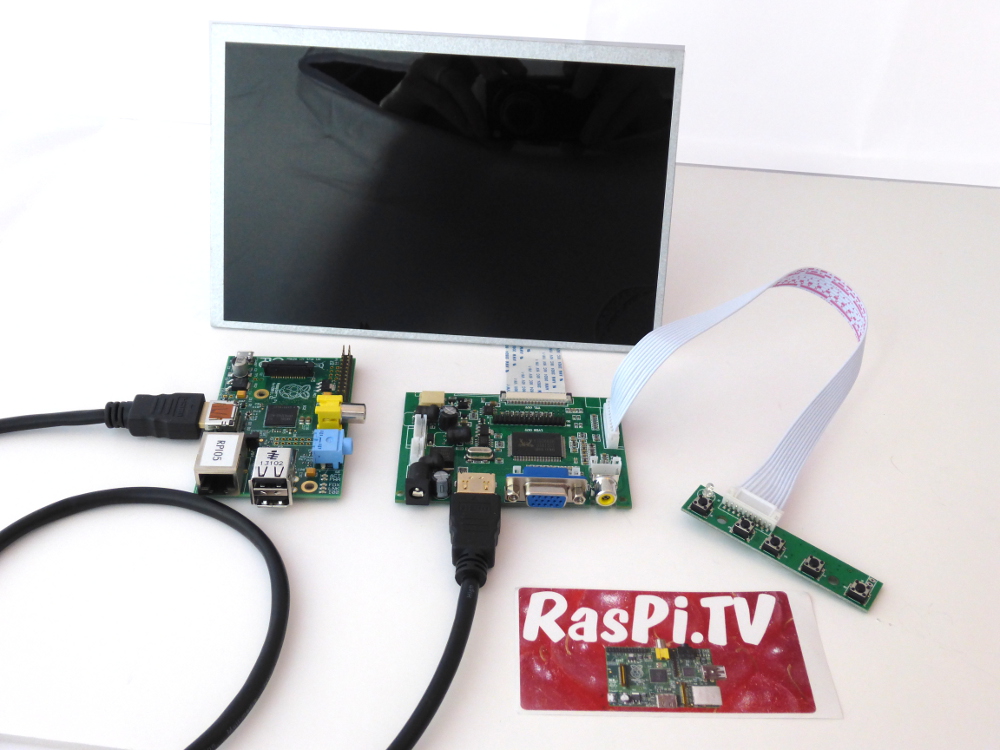 Note: The screen and associated hardware Alex gave me is a beta model. Any of it may change by the time people receive their orders as there are a number of improvements and tweaks being made. The controller board in particular is going to look different and may have different connectors on it. 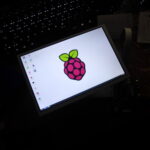 The screen itself is 9″ 1280×800 LCD which is the same resolution as the excellent Nexus 7 tablet. It is 4 mm thick with a 5 mm bezel around the edge (approx). The bezel along the bottom is slightly wider at 8 mm. This is going to making it perfect for mounting in DIY enclosures. On the rear of the screen is a ribbon cable which connects to the controller board (via 51-40 way converter).

The quality of the screen is great. It’s really hard to say much more than that given screen properties are quite subjective. However it stands up well against the other screens I use on a daily basis. The screen pixel density is good enough to use the terminal or LXDE graphical interface without any major adjustments. Although I’m sure owners will prefer to tweak font sizes etc in order to suit their projects and/or eyesight. 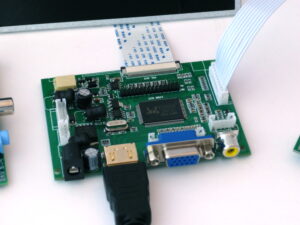 The controller board accepts a 12V DC input and provides the sockets required to connect it to your Pi. The HDMI input means you could connect it to other devices which opens up possibilities for photographers and camcorder users.

The board can run from 12V but I successfully powered it from a 5V USB RAVPower Power Bank. This was great as I was able to power the screen and a Pi at the same time without needing any mains power. This might simplify projects that require the setup to be portable. It has been suggested that the final board would have a USB port allowing a Pi to be powered at the same time, eliminating the need for two power supplies. 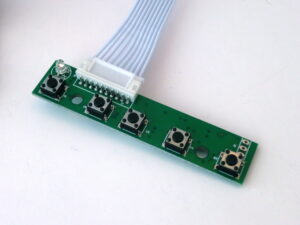 The buttons are mounted on a separate board which is in turn connected to the controller board by a ribbon cable. The buttons provide Power, Menu, Up, Down, Source/Back functionality and if you’ve ever used the controls on a PC monitor you won’t have any trouble with these. I managed to use them without reading the instructions. 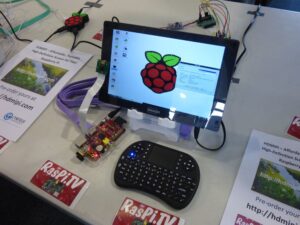 It isn’t very practical to use the screen on it’s own with the controller board and ribbon cables hanging out the back so you will most likely need an enclosure of some sort. Luckily the HDMIPi Team is also taking care of that. They have demonstrated a prototype case which is similar in principle to the Pimoroni PiBow case. That is a sandwich of layered plastic.

There are some good photos on the official enclosure page.  The prototype case looked cool when I saw it at the last Cambridge Raspberry Jam. All kickstarter pledge levels included an enclosure as do the current pre-order levels. Pre-orders start at £75 for a 9″ HDMIPi 1280×800 LCD screen, driver board and plastic surround.

Since receiving this equipment there have been a number of new announcements about the refined specifications. It is likely that the controller board will not include the VGA or Composite connectors although the VGA pins will still be available on the board. The good news is that this means there will be space for an extra HDMI connector. This won’t suit everyone but two HDMIs is a very attractive feature as far as I am concerned.

For official updates make sure you follow @HDMIPi on Twitter. It’s also worth considering following @Cyntech1 and @RasPiTV for other Pi related tweets.

The official website is hdmipi.com and you can place pre-orders!

* I carefully hid a sticker in one of the photos. See if you can spot it 😛