Just before Christmas I was lucky enough to receive one of the first Pipsta printers. The thermal printer is described by its makers as “a smart little printer that’s full of big ideas” and it gives your Pi the ability to print onto rolls of thermal paper.

Thermal printers don’t use ink which makes them cheap and easy to run.

All you need to add is a Raspberry Pi. Ideally a Model B+ but the printer is compatible with a Model B or an A+. Although I’m using a Model B+ a Pi 2 will fit in there just fine due to the identical physical dimensions and mounting holes locations.

Rolls give you the option to keep printing onto a continuous strip of paper. This gives it an edge over a traditional printer as you can create printouts far longer than the average sheet of paper. 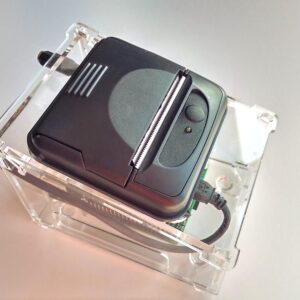 Once setup the tutorials run you through various example scripts which show you how to print :

The Official Pipsta website now contains an impressive amount of videos, tutorials and frequently asked questions so it’s worth a look if you want more details.

Their BitBucket repository contains the example Python scripts that are downloaded to the Pi during the setup process. These allow you to get printing within a few minutes. 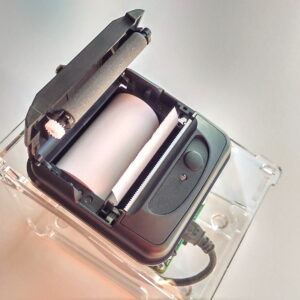 Pipsta takes 36mm diameter x 57.5mm wide thermal paper rolls. These are cheap and easy to obtain as they are used in cash registers and chip-n-pin machines. Being a thermal printer there is no ink to worry about which is a relief if you’ve ever had to buy inkjet cartridges with your hard earned cash!

The linerless label rolls are interesting. They look like the normal rolls but have a tacky layer on one side. This means you can stick the paper to a flat surface a bit like a post-it note.

The button on the printer allows you to feed the paper or print a test sequence.

This video shows the printer and Pi Model B+ mounted in its perspex case :

Here is a Vine video showing my printer in action :

Once the examples were installed it was easy to start customising them and I intend to write a few more articles as I create new scripts for my printer.

I’m sure people will wonder if there are other alternative printers available, and I’m sure there are, but a supported product is much nicer to work with. The documentation and software resources are very good and this means you can get a printer integrated into your Pi inventions with a minimum of fuss.

Given the number of LED and screen based add-ons for the Pi it’s nice to see something in a previously neglected area. The Pi eco-system gets better every day!

Able Systems are offering to donate 10% of the profit of every Pipsta sold in 2015 to the Raspberry Pi Foundation. Pipsta is currently available from ModMyPi.