While your Pi is connected to a network it will be able to set it’s clock correctly using NTP. Without a network connection the system time and date will almost certainly be wrong. For some projects this is a problem especially if you are logging timestamps or performing other time sensitive operations.

This can be solved using a Real Time Clock (RTC) module. This will use a small coin cell battery to keep the time for the Pi even if it is turned off. When the Pi reboots it can set it’s own internal clock using the time held in by the RTC.

The easiest way of implementing an RTC is to buy a pre-made module. Luckily RTC modules are relatively cheap and easy to obtain. Some modules will attach directly the Pi’s GPIO header but these may get in the way of other devices so I prefer more generic modules that keep the GPIO clear for other purposes. 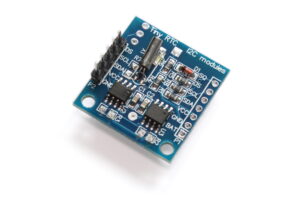 Modules based on the DS1307 and DS3231 chips are popular devices and you’ll see them for sale from various retailers. I purchased both types and quickly realised my DS1307 modules were useless. My advice would be to go for a DS3231 based module. They are more accurate and run happily from 3.3V. My two “Tiny RTC” DS1307 modules went straight in the bin.

Most generic I2C modules have pull-up resistors on the SDA and SCL pins but these aren’t required as the Pi has it’s own pull-ups. I didn’t want these on-board resistors to interfere with the operation of the I2C bus so I removed them.

The module also has a basic charging circuit for use with a rechargeable LIR2032 coin cell. I wanted to use a normal non-rechargeable cell so I removed another resistor to disable this charging circuit. The resistors were removed from the module using a soldering iron and some tweezers or small pliers. The location of the resistors is shown in the photo below :

As with all I2C devices you must configure the I2C interface. This is quite easy to do and explained in my Enabling The I2C Interface On The Raspberry Pi tutorial.

In order to ensure you’ve got the latest updates you should run the following commands :

Now we need to modify a system file using :

If it isn’t already there add “rtc-ds1307” to the bottom so it looks something like :

You can save and quit using CTRL-X, Y and ENTER.

Shutdown the Pi using “sudo halt” and remove the power when it has completed the process.

With the Raspberry Pi turned off you can now connect the module. It’s a fairly simple configuration but it needs to be correct so double check it. Refer to my GPIO Diagram to ensure you get the correct pins on the Pi’s header. 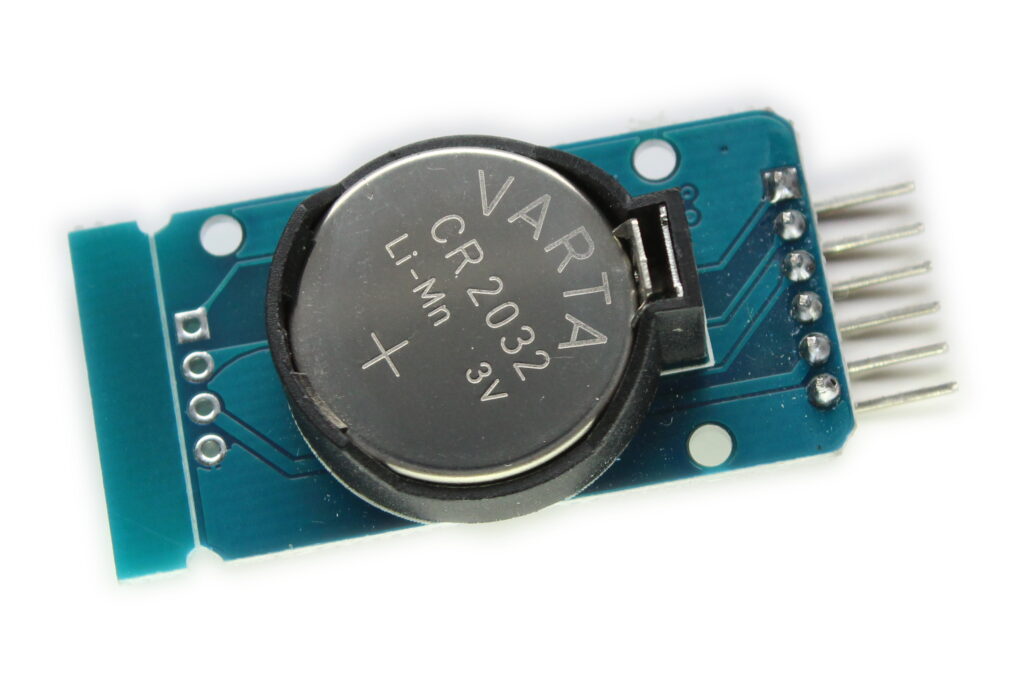 Power up the Pi and run the following command :

You should see something similar to this :

In this example “68” is the hex address of the RTC module on the I2C interface.

To ensure the DS1307 device is setup and the time synchronised when the Pi boots we need to edit another system file :

Add the following two lines before the exit 0 line : 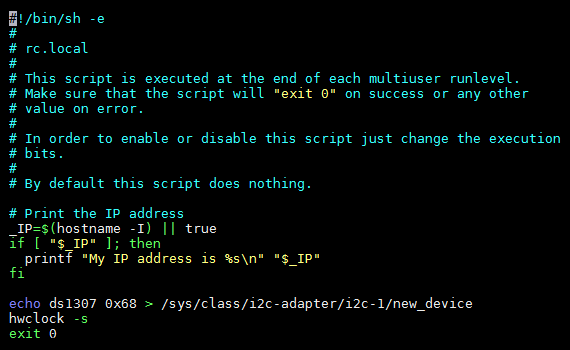 You can save and quit using CTRL-X, Y and ENTER.

Now when you repeat the i2cdetect command (see above) the 68 will turn into UU :

By default the Pi tends to show time as GMT or UTC. For me sat in Bristol this results in the time being 1 hour behind my local time. To tell your Pi what region you are in you can use :

and then select “Internationalisation Options” followed by “Change Timezone”. You can then select you location from the following screens.

I set my location to “Europe/London” and this results in “date” showing the time in BST (British Summer Time) rather than UTC. The time is then correctly adjusted by +1 hour.

Reading The Date And Time

You can read the Pi’s system time using :

If you need to set the system time for any reason you can use the following command :

Once correct you can write the system date and time to the RTC module using :

You should be able to read the date and time back from the RTC using :

By separating the commands with a semi-colon you can read back the system time and the RTC time at the same time. Hopefully they should match and look something like this :

The “hwclock -s” we added to “rc.local” sets the system time from the RTC module.

The final test is to determine if the RTC module is keeping time and that the Pi will use that time when it boots. The best way to do that is to :

Hopefully your Pi is now displaying the correct date and time and will maintain it when the Pi is powered down.