Kano is a Raspberry Pi based computer kit aimed at children and was launched on Kickstarter in 2013. It comprises of a kit of parts which can be used with a set of software activities. In the UK the current price for the standard kit is £119.99 from the Kano site. The kit is also available from Amazon.

Kano contacted me and asked if I wanted to take a look at the kit after the recent launch of the Pi 3. Under normal circumstances I would struggle to review this sort of product but I’ve got access to a small human child so decided this would make for a much more interesting test. I got the kit for free but the opinions and thoughts in this article are mine or based on those of my son. 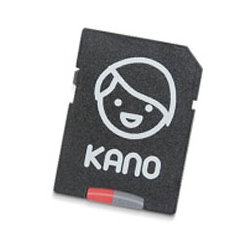 I remember when Kano first appeared on the Raspberry Pi scene and it was met with a luke warm reception by some in the community. This seemed to be mainly based on the perception that Kano was attempting to create a commercial product based on the success of the Raspberry Pi. This was always a strange reason for not liking it as the Raspberry Pi Foundation had always made it clear they wanted companies to create products based around the Pi.

Next was the price. Some complained the kit was too expensive and people could create their own for half the price. This is true if you ignore all the additional value that the Kano experience offers. If you can get by with a carrier bag of generic eBay bits then fine … congratulations. However Kano is far more than the Pi, case, cables and keyboard. The way you present these items to children is critical and as my son worked through the booklets I started to see where Kano beat anything I could have put in front of him. 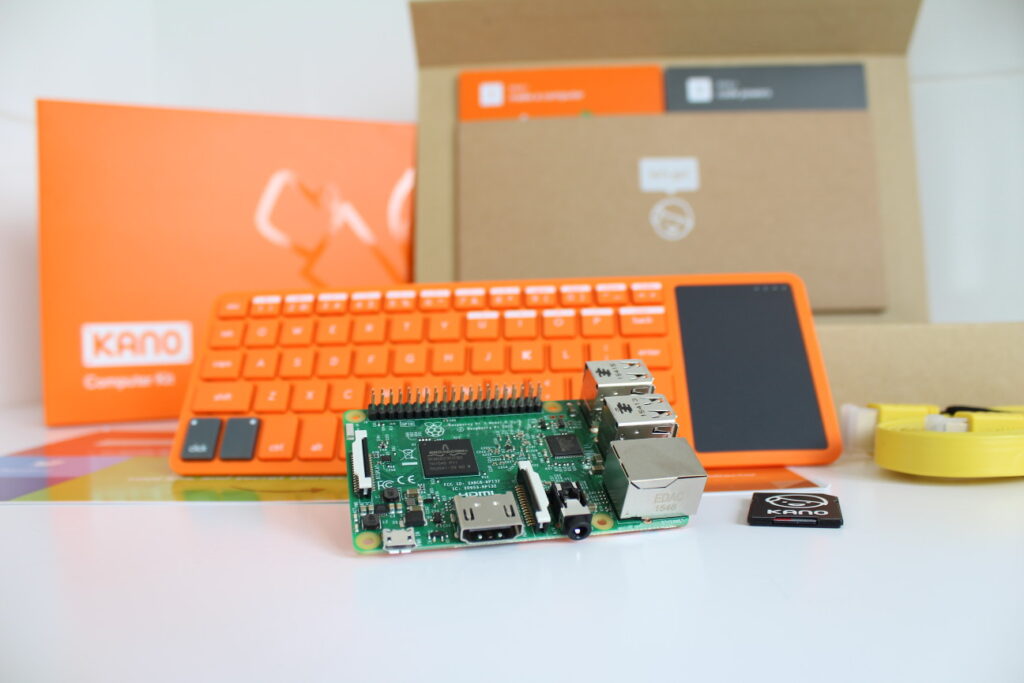 The third thing that people had a problem with was abstraction. They felt that dropping the child gently into a colourful desktop environment was depriving them of the glory days of the 1980s and kids were better off being forced to use the command line. This is just plain silly. I like the 80s as much as the next guy but assuming it is the only path to computer enlightenment is like assuming you can only become a doctor if you grow your own leeches.

Anyone who has ever tried teaching a child knows that keeping their attention and engaging them is critical. Older children have got the patience to find the command line interesting and certainly need to gain a wider set of skills but my 8 year old finds lots of typing boring. He wants to experience success and copying lots of text from a worksheet doesn’t do it. If I started with the command line he would be scarred for life and more likely to associate computers with watching paint dry. He doesn’t like Vi. He doesn’t want to compile the Linux kernel. He wants to have fun. A smart teacher knows that kids need to have fun with the “education” payload carefully and seamlessly inserted in appropriate doses. 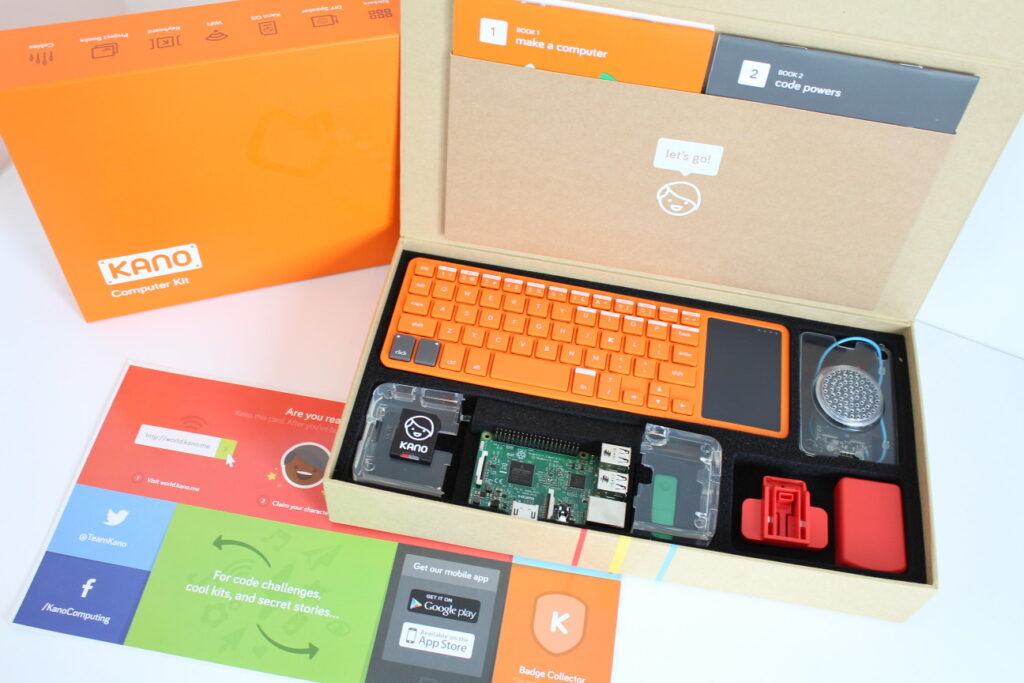 At the weekend I sat down with my son and decided to open the kit. He agreed and the Kano was going to face it’s first major test. My son has seen plenty of keyboards, cables and Pis and they haven’t held much interest for him. He’ll play Minecraft and a bit of scratch but anything else is a struggle to maintain his attention. As I opened the box there was a massive risk my article was about to end at this point …

… and here is where the Kano started to edge ahead of a standard collection of Pi accessories. He went through the box and removed all the items. Everything was a different colour and this seemed to help. The booklets were numbered and he knew to start at book one without any prompting. I simply told him to follow the instructions. 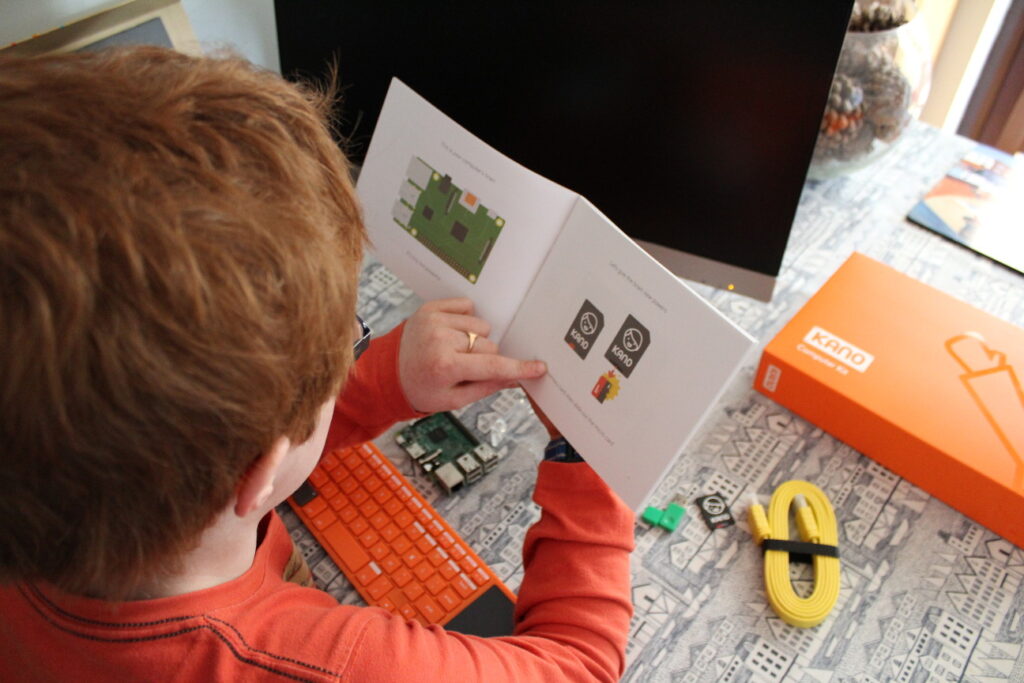 The instructions are well presented and he was happy to work through them, assembling the Pi case and plugging in the cables. The top panel includes a speaker and a number of LEDs which reminded me of Orac from “Blake’s Seven”. I had to point out the difference between a DisplayPort and HDMI socket as I was worried his enthusiasm was going to see the HDMI cable wedged into the wrong one on my new monitor.

One of the big benefits of Kano is the customised operating system. This is a colourful, beautifully designed desktop environment which provides getting started prompts. My son much prefers working things out himself and the desktop environment allowed him to progress at his own pace. He configured the WiFi password and created a Kano community account. 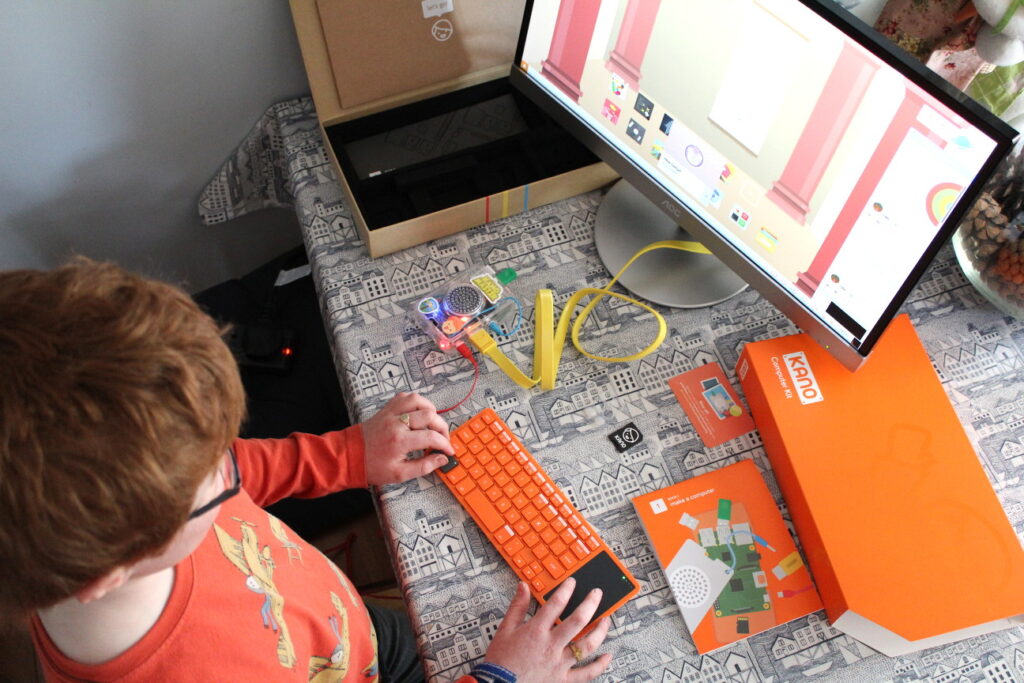 I wanted him to move onto booklet two but he dived into the Pong application. This allowed him to start modifying a basic Pong game. Next he moved onto the Minecraft exercises. He was happy working out what to do himself and I just tried to explain how the code blocks related to the Minecraft World he could see on screen.

In total we spent about an hour which is probably the most time we’ve ever managed on a technology project in one sitting. Since then he’s used the Kano for homework research and watching (carefully monitored) YouTube videos. He could have done this on a number of other devices but he was drawn back to the Kano. For us this is important because when I say “shall we do some Kano” he considers it a fun proposition.

Whatever you buy for children may end up in a cupboard in 12 months time. So yes you might buy a Kano and not use it but it has lots of potential to workout just fine.

As Kano is based on a Raspberry Pi you’ve still got the ability to do everything a Pi can do. All it takes is an SD card switch. If you prefer a bigger keyboard and standard mouse you can simply plug a set into the Pi’s spare USB ports. There are lots of bits of consumer “educational” technology aimed at kids and they all have a really limited life. Look at anything made by VTech. Kano allows you to move onto other Pi projects at any point which makes it great value for money.

As with all systems it will depend on the child. Some kids aren’t going to stick with it. That’s ok. Buying anything for a child has a risk attached to it but at least with a Kano they might actually learn something along  the way.

We’ve moved onto book 2 and we’ll write up another post with our observations.