motionEyeOS is an awesome system for creating security cameras with single board computers. This can include systems to monitor pets or burglars. It has a number of nice features under the hood and one of those features is the ability to monitor GPIO pins and display information within the motionEyeOS web interface.

The “monitoring” feature allows you to run a bash script at a regular interval and overlay the text output on the web interface. This could be used to display the state of GPIO pins or other data such as CPU temperature, sensor readings etc.

I wanted to use this feature to display the status of my two garage doors. They have magnetic switches so I decided to configure motionEyeOS to display their status given the Raspberry Pi is already setup in the same location. The door switches connect a GPIO pin to 3.3V. When the door is opened, the connection is broken and the GPIO pin is pulled Low by the Pi’s internal pull-down resistors. 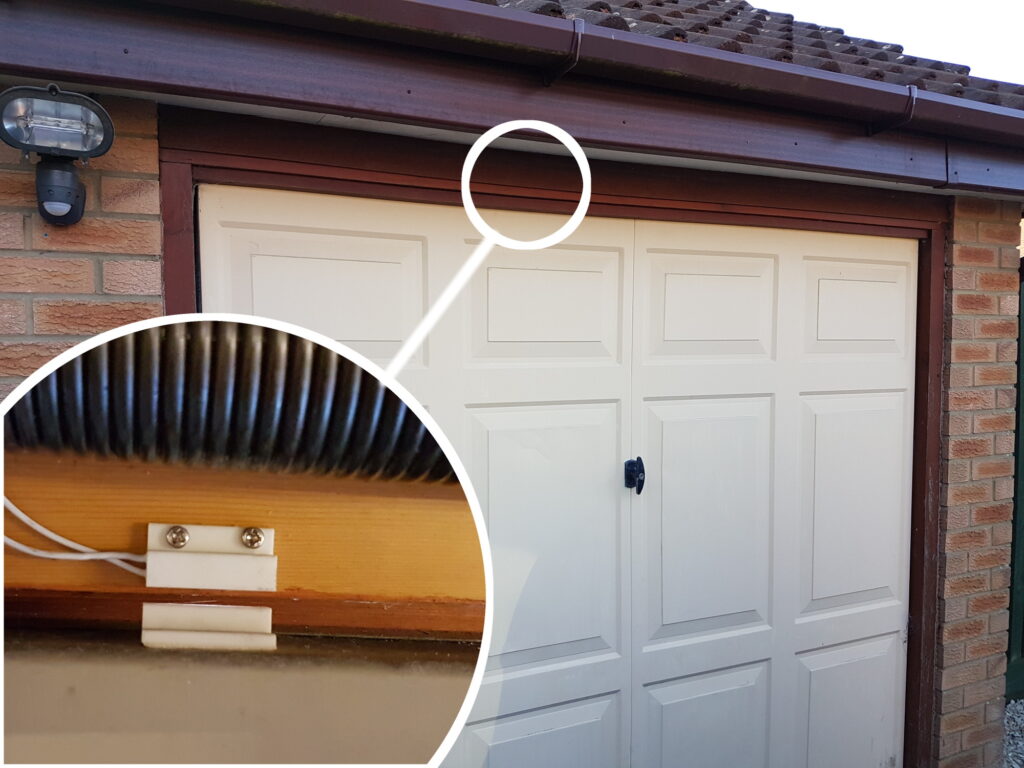 The monitoring command feature is described in the motionEye Wiki. In general it is the same as motionEyeOS with the exception of the file path you need to use.

To start with we can create a script to monitor a single GPIO pin. Make sure you have a working system and you can view your camera’s output via the motionEyeOS web interface.

Using SSH connect to the Pi. SSH is enabled by default and you should use the “admin” user account with the password you set in the settings. If you haven’t changed the default password it will be blank but I recommend you set a decent password and don’t leave it on the default!

Navigate to the etc directory :

The “1” refers to the camera with ID 1. If you have more than one camera you can add a separate “monitor_#” file for each one. A second camera can use “monitor_2” etc.

Type or paste the following :

This file is also available from my BitBucket repository. It is better to copy the text from the monitor_1 file on BitBucket and avoid potential formatting issues on this webpage.

The “test” command checks if the GPIO pin has already been configured. If it has not two echo commands are run to set up the pin as an input. These will generally default to being tied Low with internal pull-down resistors. With no connections the value will be 0/Low. Connecting the pin to 3.3V will change the state to 1/High.

To test that your script runs without error you can type :

The output should reflect the text defined in the echo statements and there should be no errors.

When monitor scripts are added, removed or edited the web interface needs to be reloaded in your browser for the changes to take effect. Clicking on the camera image will show the icons in the top right and the status of the GPIO in the bottom left : 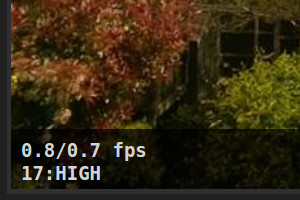 Now change the state of the switch attached to GPIO 17. You should see the text change on the screen. The “17:HIGH” text can be changed to whatever you wish to define in the bash script.

This file is also available from my BitBucket repository. It is better to copy the text from the monitor_1_twin file  on BitBucket and avoid formatting issues on this webpage.

Don’t forget to make it executable :

For my final script I adjusted the text display to be more relevant to my garage door situation. The script can be seen by following the BitBucket link to motion_1_doors.

It outputs a line of text showing the status of each door. D1 is on the left and D2 on the right. The following screenshot was taken from my smartphone and now shows the status of the two garage doors : 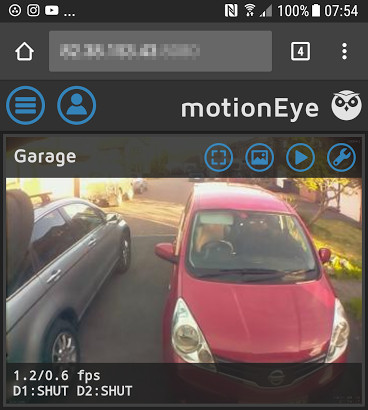 One thing I noticed was that the update text was truncated on my Smartphone. I adjusted the text elements so this was avoided. It was the reason why I used “SHUT” rather than “CLOSED”. On my phone the limit appeared to be 17 characters but I suspect this will vary on other devices. On a desktop browser I didn’t have any issues with the text being truncated.

By default the script is run once per second. You can change this by adjusting the number in last line at the end of the script :

This will tell motionEyeOS to not run the script for another 5 seconds.

The only disadvantage I could find with increasing the delay is that it also increases the time it takes to display the first reading when you initially click the camera image.

If it doesn’t work consider the following points :

Note : I have used a “\” character in the Bash scripts shown above to split long lines. This was purely for display purposes. If you take a look at the BitBucket versions of monitor_1 and monitor_1_twin the “test” command is all on one line.

You will have to decide if this technique is going to suit your purposes. What it doesn’t do is provide any notifications or alerts. In my example it shows the current status of the doors but nothing else. How useful this is will depend on your expectations. However it’s certainly a useful feature to be aware of.