The DHT11 is a low-cost temperature and humidity sensor. It isn’t the fastest sensor around but its cheap price makes it useful for experimenting or projects where you don’t require new readings multiple times a second. The device only requires three connections to the Pi. +3.3v, ground and one GPIO pin.

The device itself has four pins but one of these is not used. You can buy the 4-pin device on its own or as part of a 3-pin module. 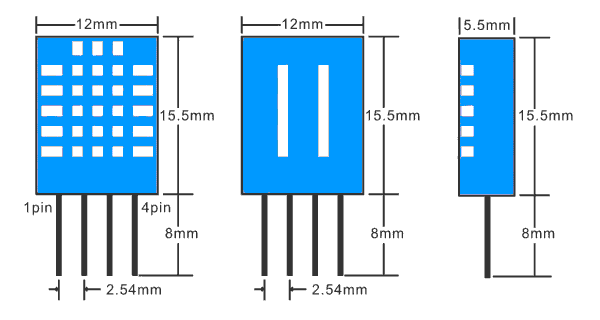 The modules have three pins and are easy to connect directly to the Pi’s GPIO header.

The manufacturers do not recommended that you read data from this device more than once per 2 seconds. If you do you may get incorrect readings. 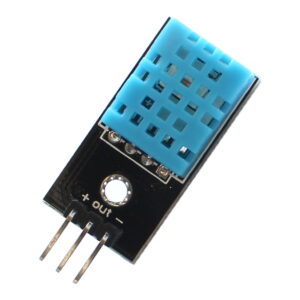 The 3-pin modules will usually have this resistor included which makes the wiring a bit easier. For this reason I got hold of the module which I could then attach to the Pi with a piece of 3-way Dupont cable.

Different suppliers may wire the module pins differently so check the PCB markings to identify Vcc (+), data and Ground (-).

The 3 pins should be connected to the Pi as shown in the table below :

Your data pin can be attached to any GPIO pin you prefer. In my example I am using physical pin 11 which is GPIO 17. Here is a 4-pin sensor connected to the Pi’s GPIO header. It has a 10K resistor between pin 1 (3.3V) and 2 (Data/Out). 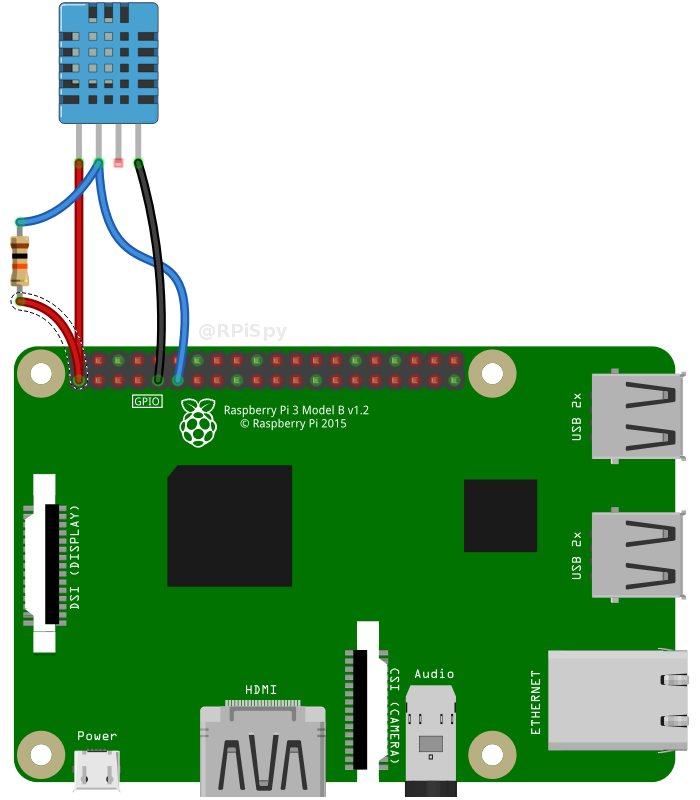 The DHT11 requires a specific protocol to be applied to the data pin. In order to save time trying to implement this yourself it’s far easier to use the Adafruit DHT library.

The library deals with the data that needs to be exchanged with the sensor but it is sensitive to timing issues. The Pi’s operating system may get in the way while performing other tasks so to compensate for this the library requests a number of readings from the device until it gets one that is valid.

To start with update your package lists and install a few Python libraries :

Then clone the Adafruit library from their repository :

Then install the library for Python 2 and Python 3 :

Hopefully at this point the library is installed and ready to be used within a Python script.

Adafruit provide an example script that you can use to check your sensor is operating correctly.

The example script takes two parameters. The first is the sensor type so is set to “11” to represent the DHT11. The second is the GPIO number so for my example I am using “17” for GPIO17. You can change this if you are using a different GPIO pin for your data/out wire.

You should see an output similar to this :

Using the Library In Other Python Scripts

Once the Adafruit library is installed and you’ve got the example script to work you can use the sensor in your own scripts. Simply import the module, setup a few variables and call the “read_retry” function :

This script can be downloaded directly to your Pi using :

The DHT11 is available from many electrical component sellers. Here are a selection :

Some may only sell the device itself so you may need to shop around if you would prefer the 3-pin module.

The DHT11 is probably best suited for projects where rapid data readings are not required and the environment is not expected to see sudden changes in temperature or humidity. A weather station would be an idea project but a central heating controller may require something different.

For projects that need a faster temperature reading rate (<2 sec) I would probably use a DS18B20 as they respond much faster to changes in temperature. But with both these sensors costing <$5 you can probably afford to buy both and experiment.