RC522 RFID modules are a simple add-on you can connect to a Raspberry Pi to read MIFARE tags and cards. This is potentially a great feature to include in a security system or any application where you need to identify an object or person without them pressing buttons, operating switches or other sensors. The contactless tags can be carried on a key-ring and the cards fit nicely in a wallet. Both of them can be hidden inside other objects to give them a unique ID that can be read by the Pi.

The obvious application is a security system where you use a tag to activate or deactivate an alarm but other applications include time and attendance systems and games.

It is possible to buy additional cards and tags but you should make sure they support one of those standards.

These RFID modules can not read contactless bank cards. They can read an ID from a smart phone but the ID is different every time so not very useful in most circumstances.

There are different modules available from the usual sources but mine is a blue PCB with eight connections. The antenna track can be seen on the PCB and it is this that communicates with a nearby tag. 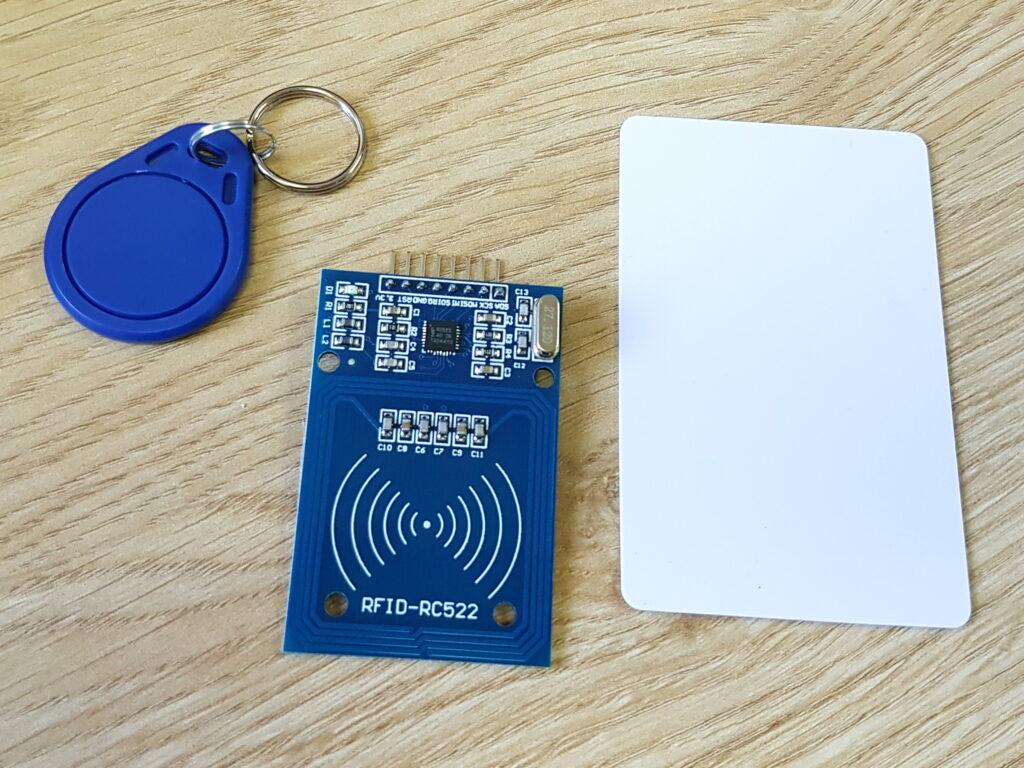 My module came with two different styles of header pins, one of which needed to be soldered onto the PCB. I soldered on the right-angle header so that the cable would be inline with the PCB. One keyring style tag and one plain white “credit-card” style card were also included. 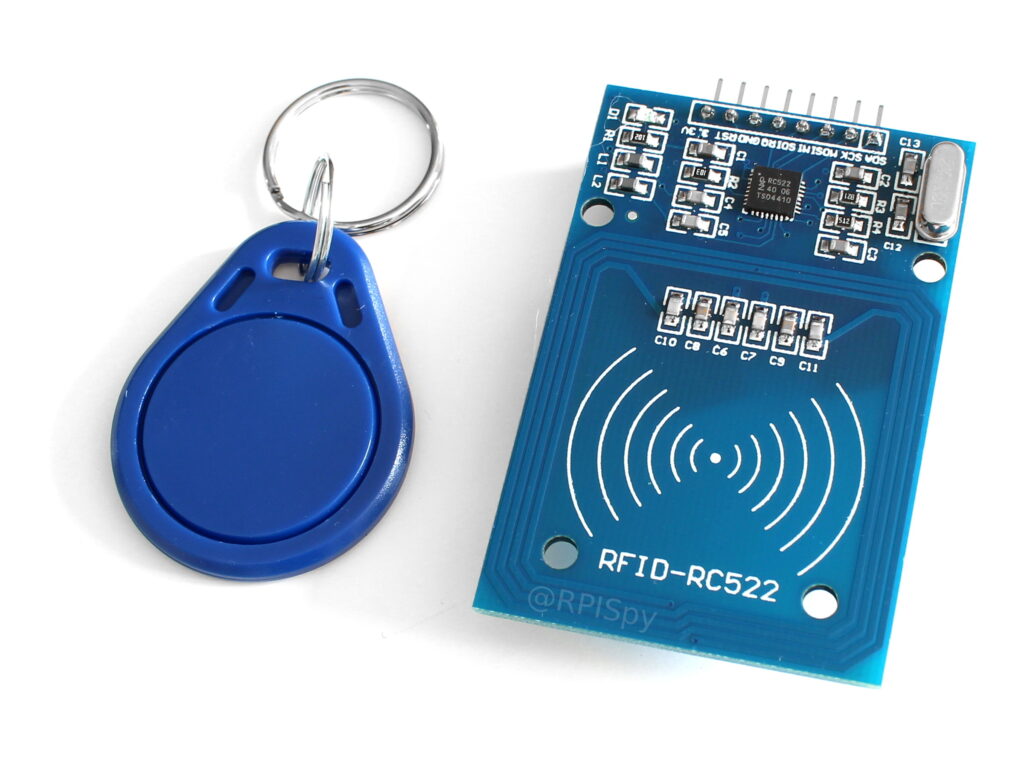 Each of these devices has a unique code (UID) which it is possible to read using a Python script.

The modules do not normally come supplied with jumper cables so you will need seven female-female jumper cables to connect it directly to the Pi.

The RC522 module has eight pins but we only need to connect seven of then to the Raspberry Pi’s GPIO header. The pins are labelled on the PCB but the markings are quite squashed. 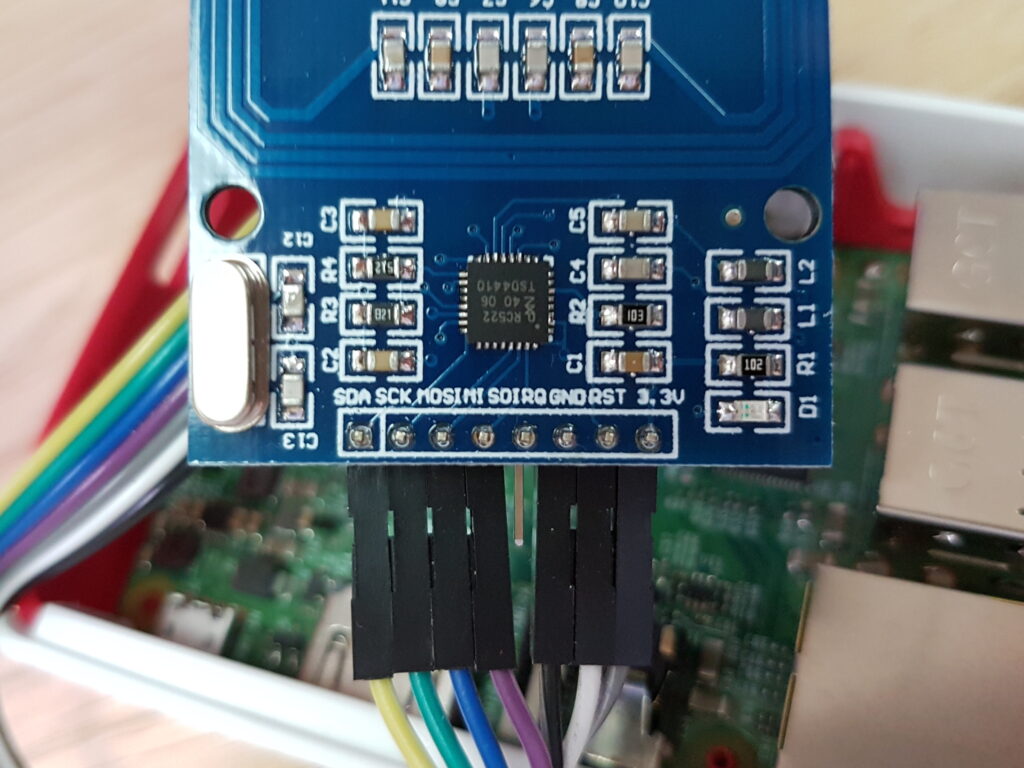 I used a 7-way female-female jumper cable to connect the module to the Pi. 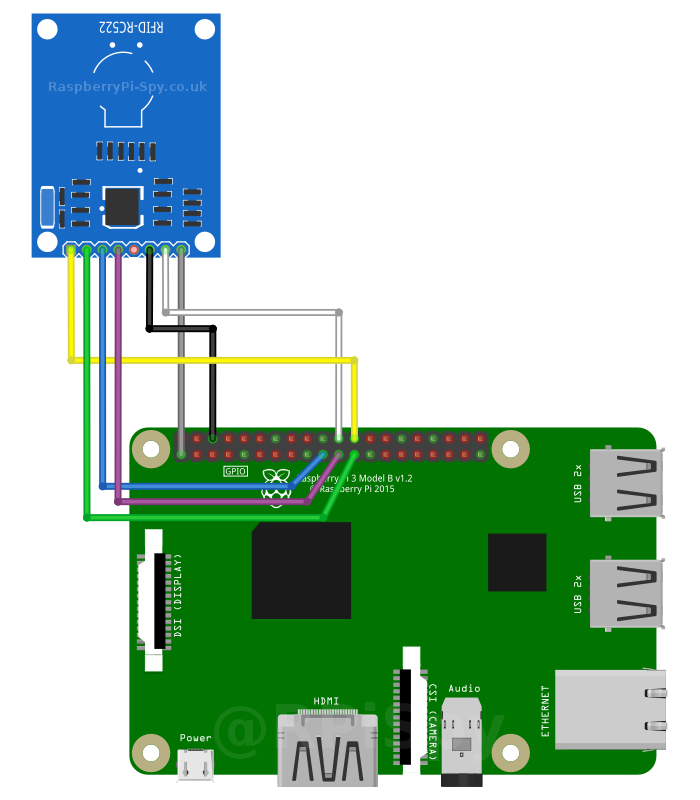 The wiring details are also shown in the table below :

The RC522 module uses the SPI interface to communicate with the Pi. The SPI interface has to be enabled as it is disabled by default. This is explained in more detail in my Enable SPI Interface on the Raspberry Pi tutorial.

If you don’t want to read that then simply run :

from the terminal or “Raspberry Pi Configuration” from the desktop and enable SPI under the “Interfacing Options” section.

Next install the spidev library using :

This installs it for both Python 2 and Python 3.

Although I tend to use “py-spidev” to drive the SPI interface in Python for this application I used “SPI-Py”. This can be installed using the following sequence of commands :

This installs it for both Python 2 and Python 3.

Finally download a library that helps talk to the RC522 module over the SPI interface. It relies on the SPI-Py library installed in the previous step.

In the “MFRC522-python” directory there are some example scripts. You can navigate to these using :

The script waits for a tag to be detected by the RFID module. When it finds a tag it reads the UID and displays it on the screen. The script runs in a loop and will keep waiting and displaying any detected UIDs.

Running this script allows you to determine the UID of the tag or card that was supplied with the reader.

By default the MFRC522 library only works with Python 2. However it is easy to modify to work with Python 3. Simply edit the “MFRC522.py” file in a text editor and convert all nine of the print statements to Python 3 friendly syntax. For example,

Everything after the print statement should be wrapped in ( ) brackets.

The example script will now run under Python 3 without any errors :

In order to simplify the output I created a modified example script. It reads a card, prints out the ID and waits for 2 seconds so you don’t get the same ID printed twice unless you hold the card in place for more than 2 seconds.

You can download this script directly to your Pi using :

and run it using :

It will run under Python 3 if you have modified the MFRC522.py print statements as mentioned previously.

This script is a bit closer to the code I would actually use if I wanted to read a card and take action if it had an ID stored in a list. For example, to open an electronic door lock.

The UID is a four element array named “uid” and the script combines each element into a comma separated string. You don’t need to use the commas and the 4 elements of the array could be combined to give a plain number. For example my tag UID would become “1483565119” rather than “148,35,65,119”.

Hopefully this will get you to the point that you can read the UID from your MIFARE tags. If you are using this sort of mechanism in a security system then be aware that it is possible to clone these cards and give them a new UID. So your system would only be secure if you prevented an attacker from discovering your UID or having physical access to your tags.

The NXP Semiconductors Datasheet provides all the detailed technical information about the RC522 chip and the protocols it supports.