This is the sad story of a fake SD card from eBay. I’ve used eBay since 2001 and used it to buy and sell thousands of items. As a Raspberry Pi fan I’ve bought cases, electronic components, sensors, tools, screens and fixings. The one item I’ve always avoided like the plague are SD cards or any form of flash media.

In order to demonstrate to friends and family why I never buy SD cards from eBay I decided to buy an SD card from eBay.

Although many people reading this will know these cards are fake lots of people will not. The sales figures for these items show that hundreds of people are buying them. This article is an attempt to raise awareness and maybe one day eBay will do something about it.

I didn’t spend long choosing an item to purchase. Any 128GB card advertised for less than £20 ($28) was almost certainly fake and there were hundreds to choose from. 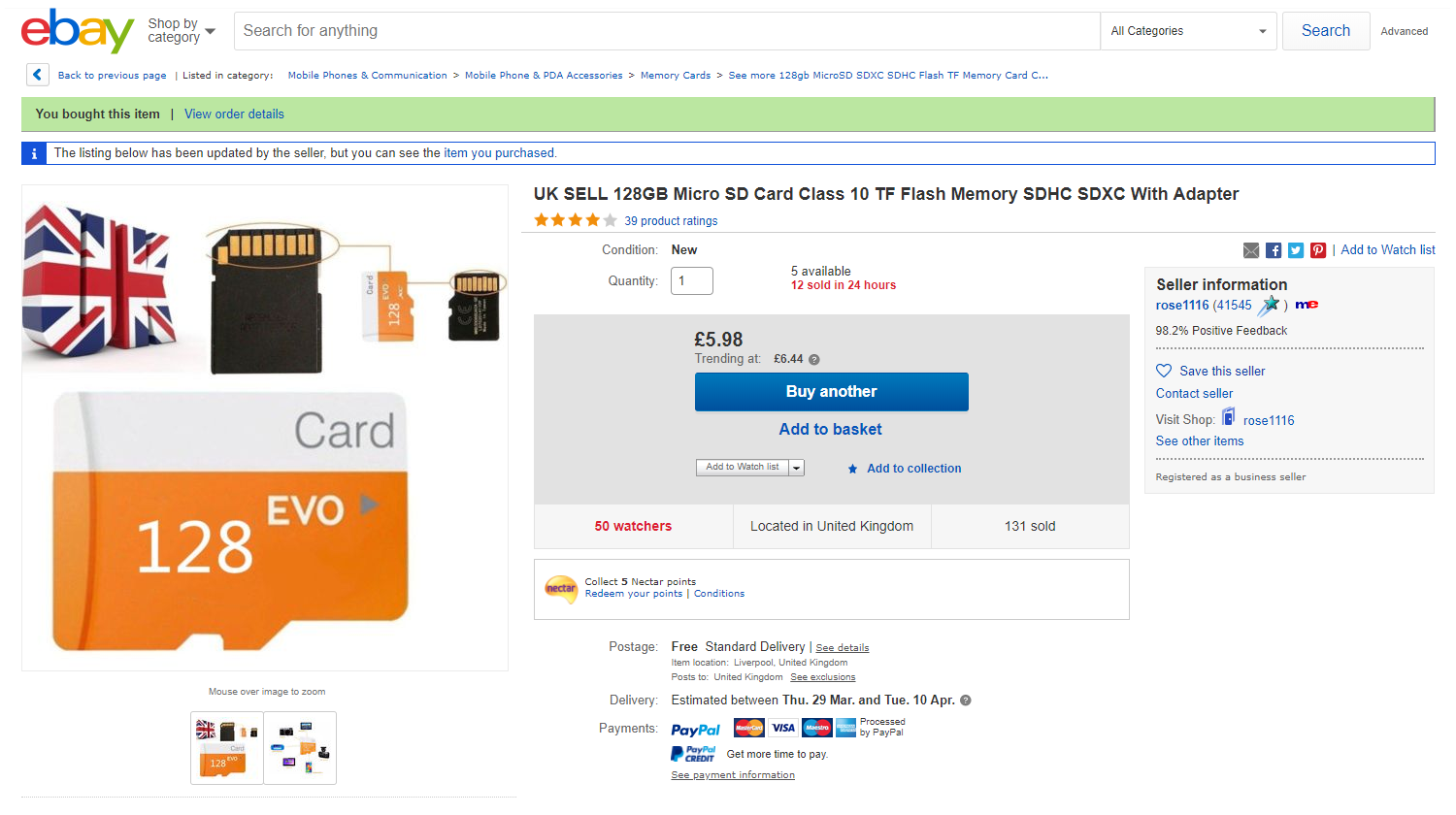 It is clear that it is a 128GB microSD card, Class 10, located in Liverpool and sold by a UK seller. It’s nicely styled to mimic the design of Samsung EVO cards even including the “EVO” text. There is no reason you would include the word “EVO” on an SD card other than to deceive.

Finally nothing inspires confidence like an eBay username containing a random sequence of numbers!

A 128GB microSD card from a reputable retailer will currently cost you between £28-£40. A quick search on eBay shows cards of the same capacity starting at £5.80. eBay buyers may assume the price difference is due to other retailers charging too much and thinking eBay is the place to get a bargain. Sometimes it is and the price being five times cheaper is not always suspicious. Compare the price of “PIR modules” and you will easily find large price differences. However for flash media these prices differences should ring alarm bells.

To entice UK buyers lots of eBay sellers like to highlight the fact they are UK sellers with stock in the UK. The item I chose was advertised with the words “UK SELL” in the title but I suspect it was meant to say “UK SELLER”. To reinforce the local nature of this item the image included “UK” letters wrapped in a Union Flag. The item’s location was specified as “Liverpool”, a UK city a mere 180 miles from my location.

Genuine UK sellers are also pulling this scam. They are selling the same low-quality garbage with similar listing titles but with a twist. In an attempt to cover themselves they usually stick a block of text in their listings explaining the card they will send you will be a random capacity. They will then try to explain that this is perfectly normal despite being a practice illegal in the UK when selling almost any other product.

Goose Electronics memory cards are purchased at discounted prices from our manufacturer as they have not fully passed quality control tests which allows us to sell these at discount prices.

These Will range from 8GB to 128GB in capacity.

We advise you always make sure you back up your data whilst using any type of Flash Drive as we cannot be held responsible for any loss of data, if any errors occur we recommend formatting the Flash Drive.

So “Goose Electronics” (no charge for this free advert guys!) are selling a 128GB SD card which they then explain isn’t 128GB and that has failed quality control tests. They helpful advise you to back up the data. Wise words Goose. You can be my wingman any day!

Our Micro SD Cards have been professionally upgraded, meaning that the capacity and speed of our Flash Drives can vary with a minimum of 8GB usable storage capacity and a maximum of 128GB. Our Micro SD Cards may show there is more memory available, however errors may occur once the maximum usable capacity has been used. When purchasing our item please ensure you have read and understood the following information. We advise you always make sure you back up your data whilst using any type of Flash Drive as we can not be held responsible for any loss of data, if any errors occur we recommend formatting the Flash Drive.

Professionally upgraded to have a lower capacity and speed that the advertised product? Wow that is some upgrade. Don’t ever let these guys upgrade your car. You’ll end up with a Citroen 2CV.

These disclaimers are there so when you complain they can blame you for not reading the description. If a high street shop tried this trading standards would have the shop shut down. I’m not a lawyer but I believe In the UK disclaimers like this breach various bits of consumer law. eBay are more flexible it seems when it comes to consumer protection. You can advertise anything with any title as long as you stick a disclaimer in the description. 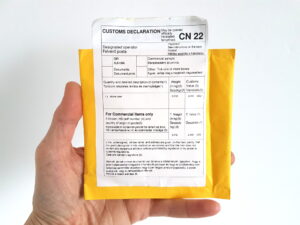 The card took 14 days to arrive. This was a surprise given it was meant to have been dispatched a mere 3 hour car journey away.

However the parcel told the true story. It had a CN22 customs declaration and the tracking numbers made it clear the item had actually come from China via Hong Kong airport. That’s a journey of 4,800 miles.

The proof they say is in the pudding. A 128GB memory card rated at Class 10 needs to meet two basic requirements. It needs to be capable of writing sequential data at a rate of 10MB/s and store a total of 128GB of data. With formatting it won’t be exactly 128GB but it should be at least 110GB+. 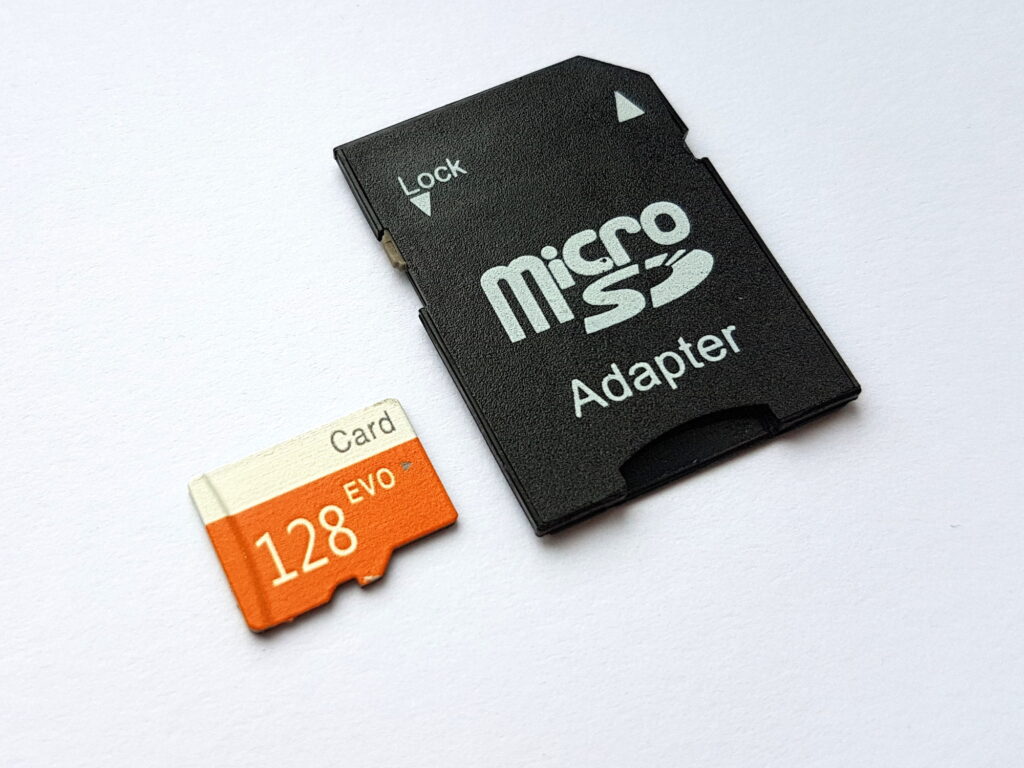 So lets see how my card performed.

Relying on an operating system to report the capacity of an SD card isn’t good enough at it will generally read the capacity from the card itself. Cards can be re-programmed to report a fake capacity. Here is a screenshot showing Windows 10 reporting the capacity as 117GB. This would be acceptable if it was true. 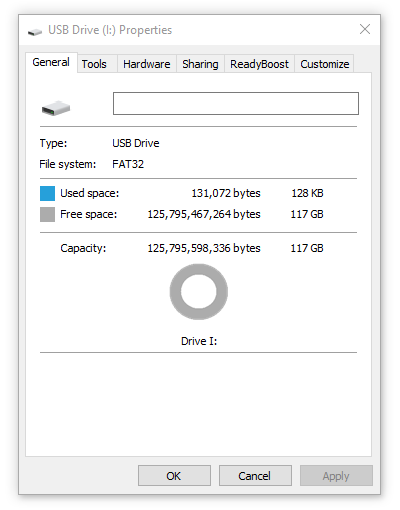 Writing data on its own isn’t a good test as fake cards will often just keep overwriting data previously written data. The *only* true test is to write data to the card and check that all the data can be read back successfully.

To do this I used the “H2testw” utility. Here are the results : 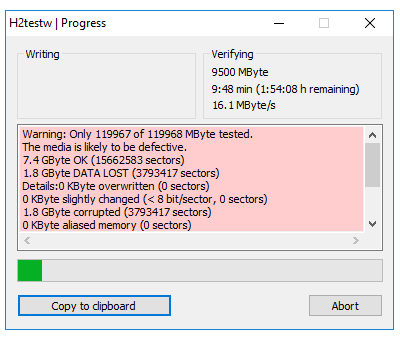 To test speed I used CrystalDiskMark : 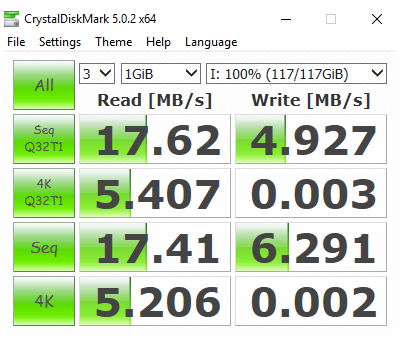 The read speed isn’t that bad but the write speed is poor. I would expect the sequential write speed to be at least 9MB/s and not as low as 4.9.

This is not a Class 10 card as advertised. It’s Class 6 at best.

As we can see the card is fake. Here is a summary of everything that is wrong with this item and the reason it and hundreds like it should not be available on the eBay platform :

These things are all fairly obvious. So obvious I can only assume eBay don’t care as they are happy to take their share of the money. Money obtained under false pretenses.

For this reason I would advise not buying ANY flash media based products from eBay. The proportion of fakes is so high finding a genuine product is a complete lottery.

There are no genuine 128GB SD cards on eBay being sold for less than £20. The cards between £20-30 should be treated with suspicion.

Having determined the card was fake I requested a refund from the seller. They sent this reply :

Hi，dear friend Thank you for your message, sorry for any inconvenience caused to you, we will solve it with a happy ending, please don’t worry about it, could you please inform us that how much you want us to refund will make you satisfied? We will not let you lost anything from us, and we will help you. Looking for your reply, sorry to disturb you for a while. Have a nice day!

I replied asking for a refund of £5.98. They provided the refund without any issues.

However, they are still happy to sell these items to other people who are going to find out the hard way they are fake.

I gave the seller negative feedback. I’ve never done that before (over 700+ transactions) but I don’t have much love for internet scammers. The refund was made without fuss but when you are robbing people it probably pays to quietly deal with the ones who complain and hope they go away.

The eBay reporting system is completely inadequate. If you try reporting this sort of scam there isn’t an easy way to do it. The report requires you to chose from a selection of menu options that don’t really describe the issue. Not that it matters. Any reports will be ignored. As proved by the bumper selection of fake cards that are offered day after day.

Given how easy it is to spot these fake SD cards on eBay and given the number of listings I’m disgusted that eBay ignores the problem. They are sitting there watching their customers buy fake media from scammers knowing they are wasting their money. Watching innocent shoppers hand over cash to scam artists who are free to operate unhindered.

Here are some Questions and Answers based on conversations I’ve had with people on this topic.

Q: Why bother doing this when you know the card was going to be fake?
A: To prove it to people who didn’t believe me. They trust eBay and don’t believe eBay would allow it.

Q: If the SD card stores 8GB does it matter? It was cheap.
A: £6 isn’t cheap for an 8GB SD card, especially considering it is probably a sub-standard reject from a production line. The quality is questionable as it was sold by a scammer. If you want an 8GB card buy an 8GB card.

Q: If so many are fake why are people not demanding refunds?
A: Many people are putting these in phones and not noticing that they aren’t holding 128GB of data safely. The people who are noticing are those that are storing a lot of photos and videos and then discovering that media is lost forever. Many users don’t need that much space so may only notice months later when it is too late.

Q: The SD card is cheap. It’s worth taking a chance!
A: No. It isn’t. The sellers are scamming people. Why bother taking the risk when there is nothing to gain. If you order a 128GB card but would settle for 8GB then just buy a quality 16GB card from an honest seller. At least it won’t be a quality control reject.

Q: Maybe you just got a defective SD card?
A: That is a possibility. I consider it highly unlikely based on all the points I’ve made above. I have purchased plenty of flash media in the past from reputable sellers and never had a defective product. If this card was defective, rather than it being a deliberate scam, that simply demonstrates the low-quality trash these people are selling.

If you are an eBay scammer flogging defective fake SD cards and want to defend this immoral practice then send me a message. Will be happy to hear your thoughts.

Criminals are operating in plain sight on eBay. The World’s largest marketplace. A market place of fakes and dishonest sellers.

I buy all my SD card from Amazon where the item is sold by Amazon.co.uk or directly from official retailers such as ModMyPi, The Pi Hut, CPC, Farnell or RS Components.